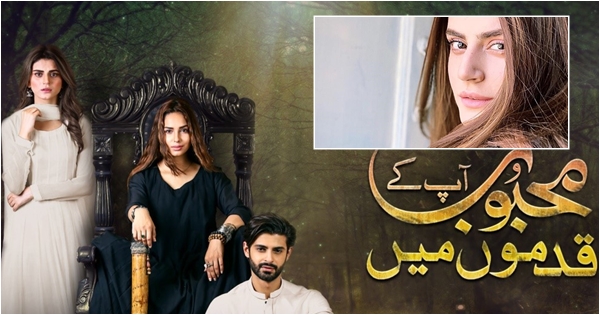 Moomal Entertainment and MD Production’s “Mehboob Apke Qadmo May” is HUM TV’s latest addition to dramas. The story is based on the plot of black magic, love, and revenge. Written by Imran Nazir and directed by Furqan Adam, the drama stars Zubab Rana, Sukaynah Khan, Agha Mustafa & Saad Qureshi in the main leads.

The drama opens to a wedding in process, but the bride-to-be, Shazia is missing from home while her mehendi function is about to begin. At this point, there are some indications for the audience that Shazia is pushed towards the wedding without her will. As the drama progresses the entire plot becomes very clear. Shazia is in love with Arsim but she is getting married to his elder brother Sarim.

Zubab Rana plays the role of an innocent, candid and joyful young girl named Sunaina who is head over heels in love with Arsim, and Arsim loves her back equally to the extent that he wants to get married to her as soon as possible.

Having aired only two episodes so far, Zubab Rana is already killing it with her stellar acting, showcasing excellence and perfection. Her role in Mehboob Apke Qadmo May is very tricky, difficult and challenging because she is going to become a victim at the hands of Shazia who will use black magic to separate her from Arsim.

There is something quite extraordinary about this young rising star that makes her stand out from the rest of the cast in every drama. Even though the 2 episodes of Mehboob Apke Qadmo May was more about Shazia and her tragic wedding, Sunaina’s character was powering, and it made the audience want to see more of her.

The chemistry between Saad Qureshi and Zubab Rana is working out great and Zubab’s acting as a playful girl in the scene was spot on. With a perfect start to the story, we can’t wait to see what would happen next in Sunaina’s life.

A new Turn in War of Youtubers as Sham Idrees exposes...