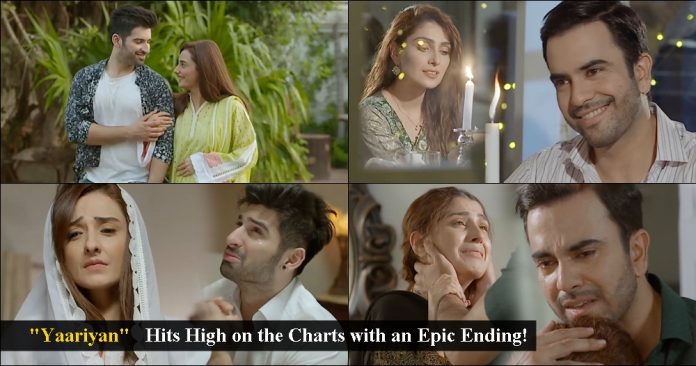 Yaariyan’s last episode aired Friday night and we could not have asked for a better ending! A story about love, friendship, and jealousy which revolves around 2 sisters “Zobi” and “Sadia”, as they struggle with their relationships because of the misunderstandings created by “Zobi”.

The drama serial was full of twists and turns which kept the viewers clinging onto the screens to see what will happen next. “Yaariyan” made its place on the screen because of the realistic story that it portrayed, which was unlike anything airing on our television screens. The unique concept led on to the drama becoming a huge success, making it a chart topper on YouTube and our television screens. With its brilliant story line that had the audience’s hooked right from the beginning, “Yaariyan” has been a fan favorite from the first episode.

Written by Sameena Ejaz and with the brilliant direction by Syed Wajahat Hussain, the unique story was conceptualized by Abdullah Kadwani. The different storyline was able to break the TRP ratings through the roof. Everyone watching the drama was fascinated with the concept of it and couldn’t guess what was going to happen next. “Yaariyan” proved to be a big example of the changing entertainment scene in our television industry, marking another success for Sameena Ejaz, Wajahat Hussain, Geo Tv, and the man behind the concept: Abdullah Kadwani.

Geo has managed to bring forward some of the best dramas to the screens in the past decade. Having aired some of the best works including; “Dil Kiya Karay”, “Ghar Titli Ka Par”, “Khaani” etc produced under the banner of 7th Sky Entertainment, they have managed to bring narrative based stories to our television screens. The content of every drama is different, the typical concepts are not reused which is one of the main reasons for their success and the praise it receives from the audience. These dramas not only entertain us, but they leave us with something to think about and something to hold on to.

With the brilliant new storylines and moral based stories, Geo Entertainment under the guidance of Abdullah Kadwani & Asad Qureshi. have managed to up the game of entertainment in the Pakistani drama industry. With back to back blockbuster dramas airing on Geo, we are finally at the receiving end of great entertainment and it looks like it is only going to up from here onwards.