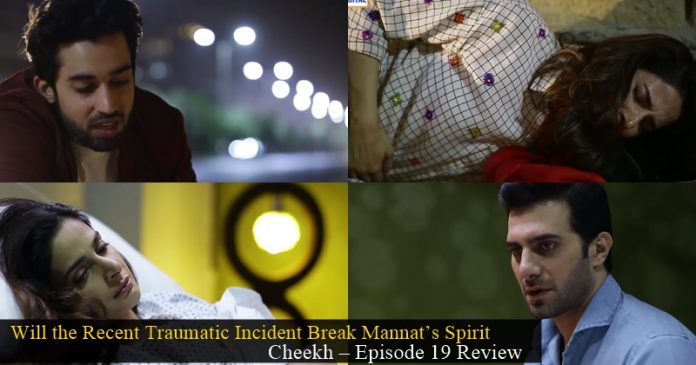 With every week’s episode, Big Bang Entertainment’s Cheekh comes one step closer to becoming one of the most exemplary TV dramas of Pakistan. Every episode, we are presented with a new twist in the on-going court case of Nayab’s death. Meanwhile, Wajih is emerging to be the evilest character of television history. Bilal Abbas Khan has given a tremendous performance as Wajih and the writer of this drama, Zanjabeel Asim Shah, really has composed the character to perfection.

This week’s episode was one of the darkest episodes of the drama. While Nayab’s case has reached to a crucial point, Wajih has crossed all limits when it comes to taking revenge from Mannat. In doing so, he has not only hurt Mannat physically and psychologically, he has also sabotaged his relationship with Shayan, maybe for the good. Although he does not realise it yet, Wajih is becoming isolated because of his behaviour and attitude. It’s only a matter of time when Yawer will turn against him as well.

There is no denying the talent and exceptional acting skills of Bilal Abbas Khan. However, it is safe to say that he has given his career’s best performance till date. To bring the inhumane side of a character out for the world to see is no easy feat, but Bilal has done it to perfection. On the other side, Saba Qamar has portrayed Mannat’s grief on losing her unborn child brilliantly. The sentiments behind the loss could only be expressed that perfectly if the actor has complete understanding of the character’s mental state. However, in my opinion, the most powerful performance was by Emmad Irfani in this episode. His portrayal of Shayan, who displays torment and agony, was not just a great performance but painted a very realistic picture. Any man who has been in a similar situation would be able to relate to Shayan’s character.

Things are definitely heating up in Cheekh and the story is reaching a pivotal stage. It seems like all the characters are nearing their breaking point and things can start going wrong for Wajih. What fate has in store for him, only time will tell.

Bilal Abbas Khan is the unconventional hero and shining star of...

The OST of Drama “Kahin Deep Jalay” Will Tug at Your...