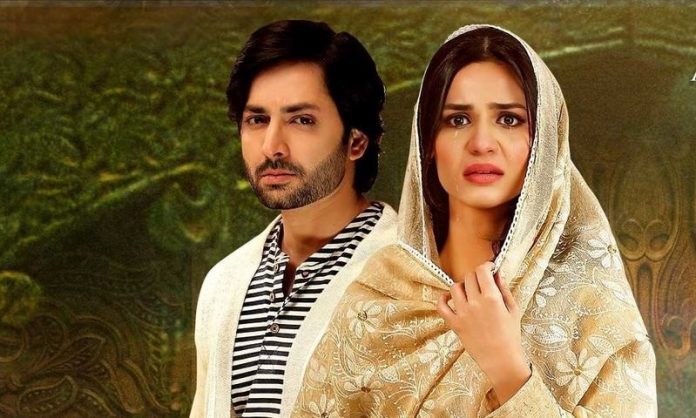 7th Sky Entertainment’s Mera Rab Waris, starring powerhouse performers Danish Taimoor and Madiha Imam in the lead, has been very gripping since the beginning and we are loving the onscreen bond between the two versatile actors. The positivity of Madiha Imam’s character, always imparting words of wisdom to people around her, allures us to watch the drama week after week.

Last night’s episode had some very shocking and interesting turns of events, especially in Nimra’s life. The secret of Faizi being in love with someone before marrying her was unveiled on Nimra, as she overhears Faizi’s conversation with her mother. Shocked at first, she manages to compose herself and accepts it, while also committing to remain grateful to Faizi for accepting her as his life partner, despite being in love with someone else.

It’s a wonder what would have happened if she had known it was Ayesha, but Faizi covers it up at that moment, assuring her that there is no one other than Nimra in his life at present. The conversation between Faizi and Nimra in that particular scene is pretty intense, thanks to a great script by Jahanzeb Qamar and amazing direction by Asad Jabal.

On the other hand, Ayla uses her final card to turn Ayesha’s heart against Haris and to grab Haris’ undue attention. This time she says that her wedding date has been fixed and she is going back to her father, who apparently lives somewhere abroad. Durdana, who has been longing to make Ayla her daughter-in-law since forever, gets all too emotional on the news and forces Haris to buy her a wedding gift.

Unaware of this conversation between Durdana and Haris, Ayesha comes across the ring Haris has bought for Ayla and assumes that it is a secret gift for her and she gets happy. The naïve girl does not know the heart break that awaits, and we feel very sad for this innocent soul.

Haris is still frustratingly clueless about Ayla’s evil intentions and accepts her invitation to have one last dinner with her.

Over all, the episode was quite engaging, keeping us glued to our screens till the very last scene. The drama is progressing at a good pace and there is not a single dull or dragged moment in this episode. Madiha Imam and Mirza Zain Baig stole the show, while Sharmeen Khan also impressed us and brought her otherwise supporting role to limelight.

It seems that Ayla’s scheming will hit the right chord and she will unfortunately, succeed in creating a rift between Haris and Ayesha this time. Tune in to Geo Entertainment to watch this intense family saga every Thursday at 9 pm. By Afshan Zahra

Mannat Loses Her Child, Her Case & Now Her Mother Cheekh...