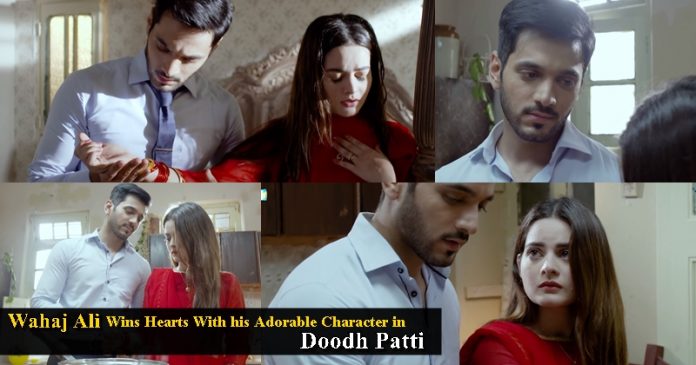 Wahaj Ali is starring in the new made-for-web short film, “Doodh Patti” being aired on the YouTube channel, Dramas Central. The film stars with the shy girl Gul played by Minal Khan and her caring husband Salar played by Wahaj Ali. Wahaj Ali surely managed to make his fans fall in love with him even more as he portrays the role of a loving and caring husband, who secretly looks after his new wife.

His diverse choice of roles and versatility is in fact one of the qualities he possesses that gives him an edge over others in the field. Whether it is his electrifying performances on screen or his charming looks catch the audience’s eyes, Wahaj Ali is surely a young talent to watch out for and he’s making his way up in the drama industry.

In this short film, he has shown everyone how one can express their love in the cutest way possible. Wahaj Ali has done a brilliant job in portraying a generic character in a very unique way. Bringing his own element to the role, he brought Salar to life and instantly made everyone fall in love with him. Even if it was the work of his expressions alone, he definitely gave the best love vibes ever.

Wahaj Ali’s expressions in the scenes will definitely melt your hearts. The whole scenario takes you in a world apart, where all you can feel is love.  Wahaj Ali’s performance in this short film is different from the roles he has been playing. He has morphed perfectly into Salar’s character- a soft spoken, sweet guy with an adorable smile.

Wahaj Ali’s brilliant on-screen chemistry with Minal Khan is also a treat to watch. They make a cute couple who definitely left us feeling forever alone. So, if you feel like you’ve been missing out on some love vibes in your life, Doodh Patti is the perfect opportunity to feel all the love and, of course, swoon after Wahaj Ali.