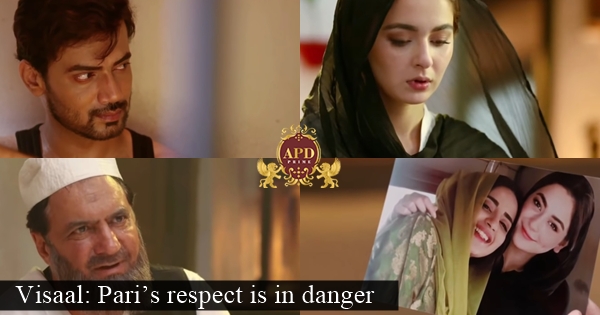 We’ve been dreadfully waiting for Visaal’s this week’s episode and here it is, folks! It’s limiting people’s attention and some of us had found ourselves grinding our nails when the commercials hit. We saw in the last episode that Akram was arrested and beaten badly for his alleged sin PLUS he asked Munna to be there for Pari if she needs anything.

The episode opens up when two bandits try to break into Pari’s house but luckily, they didn’t notice that Munna was also there sleeping. He beats them hard and shoos them away but people’s lousy gossipy nature put Pari’s esteem in risk. They keep spreading rumors that Pari called those two brigands herself. Trust us on this, such sick people must be beaten real bad!

A few guys talk to Maulvi Sahib about it and he finally decides to keep Pari with him not caring about what Maulviani Sahiba would say. Maulvi Sahib visits Bua’s home and tells Pari to pack up, comes with him but she refuses straight away. She claims that it’s her father’s house and she’ll not leave it. Brave girl! Maulvi Sahib leaves with a long face but later on, Bua tries to explain Maulvi Sahib’s perception to Pari and tells her that she must do Nikkah in order to stay safe from pointing fingers. Pari chooses Munna because she considers Munna brave enough to take care of her.

In the lockup, Akram gets very angry at those two crooks. He tells Munna to take utmost care of Pari and shoot the two offenders wherever seen. Munna surely is a decent and loyal guy but Bua wasn’t happy with Pari’s decision. But we know one thing; Akram isn’t going to be happy when he comes to know that Pari has chosen Munna for Nikkah.

Next day, Maulvi Sahib calls Munna at the mosque and asks him if he has any objections regarding Nikkah with Pari. He delightfully claims that nothing else had sounded happier ever. The next day Munna pays a visit to ask if Pari wanted anything but she calls him inside and tells him that she didn’t have any objections with the Nikkah. BUT! She did have three conditions.

One:  He will have to live in her house.

Two: He will have to leave Akram’s job as she’ll offer him another respectful job.

Three: He will have to be her savior for the rest of his life.

Munnas’ Khala meets Maulvi Sahib and decides for the ceremony to be held after a month. Meanwhile, Doodhpatti gets bailed out of jail and is astounded to hear about Pari and Munna´s Nikkah.

Pari’s decision is quite reasonable but she and Munna don´t know what Akram will have in mind once he gets to know about it. It is going to be disastrous for sure, as Akram is really unkind when it comes to Pari. We hope that everyone will stay safe from Akram´s fury in the upcoming episodes. What do you think what will Akram have in store for Munna and Pari? Do share your thoughts! – By Asbah Umais 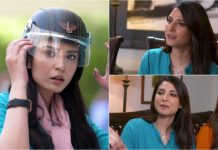