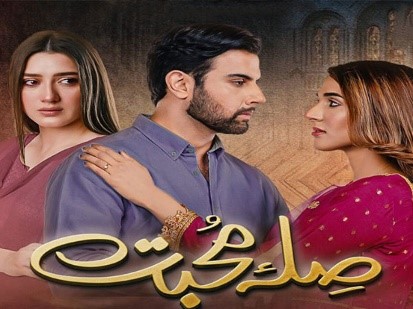 Sila e Mohabbat first aired on Hum TV three weeks ago and just like everything they do, it has soon acquired hit status thanks to its entertainment quotient and brilliant performances. The show is a love triangle that also encapsulates relevant themes of family politics, second marriages, and prejudices that destroy families.

During this week’s episodes, Alizay continues to face the anger and hatred of her brother while she lives with Tabrez and her family and looks after Raniya whose condition continues to worsen. Tabrez asks Alizay to join him and his family for lunch but faces his parents’ opposition. His mother trips and twists her leg. Tabrez and Alizay take her to the hospital where they run into Raheel, her brother, and his wife. Raheel tells her she is as good as dead for them and she should never return. His wife goes home and tells Alizay’s parents that she is happy and is expecting. Tabrez’s mother has an outburst after Alizay gets Raniya the pills she asks her for. There was a lot of drama and chaos in the episodes while Alizay and Tabrez brave it all.

The show stars Rabab Hashim as Alizay, Noor Hassan as Tabrez, and Momina Iqbal as Raniya in the leads. Waseem Abbas, Ali Safina, Shaheen Khan, and Ayesha Mirza are part of the show’s supporting cast. The show has ample doses of romance, suspense, emotions, and entertainment.

The entire cast is great and delivers promising performances however credit should be given where it is due. Noor Hassan shines in the role of Tabrez. He is calm, sober, endearing, just and noble. These are all the qualities that make for an ideal man and Noor adds all of that and does full justice to his character. He is a talented actor who is giving it all on the show and is a scene stealer in every frame.

Rabab Hashim as Alizay is amazing and your heart breaks for her character. She bears everything without pursing a lip or batting an eye. She is strong, resilient, helpless but still determined to make it through the storm of troubles that lay ahead for her.

What will happen in the next few episodes? Will Raheel forgive Alizay? Will she go to her parents’ place? To find out, keep watching Sila-e-Mohabbat on weekdays, only on Hum TV.