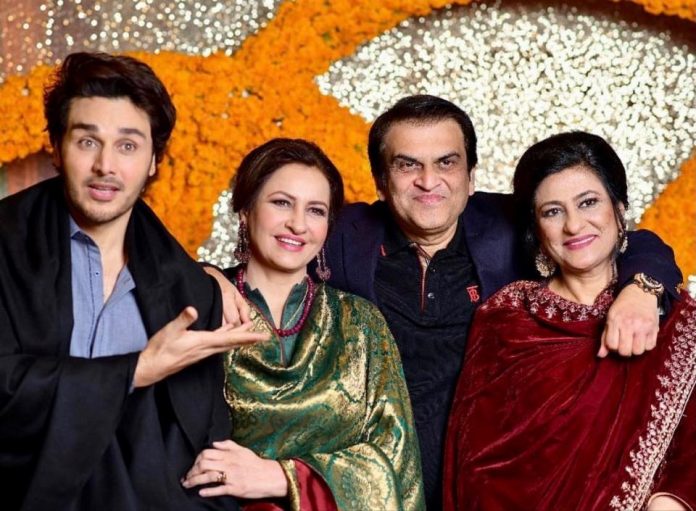 The teasers and BTS pictures of 7th Sky Entertainment’s latest production Bandhay Ek Dour Se have caught the public’s eye as they took social media by storm! With a stellar cast that includes the talented actor Ahsan Khan in the lead role along with the beautiful female leads Ushna Shah and Hina Altaf, Bandhay Ek Dour Se seems like a love triangle. However, Ahsan Khan revealed a few months back in an interview to Instep that Bandhay Ek Dour Se is a nice family drama with a simple story, well-knitted small moments, and small gestures in a middle-class joint family.

As soon as the BTS pictures of Bandhay Ek Dour Se surfaced, they became the talk of the town as they were shared over social media accounts! Here are some more exclusive BTS pictures that were shared:

Ahsan Khan said that the drama “has a bit of romance and emotions involved. In the drama, I essay the character of Umar, who is in love with Maheen (played by Ushna Shah) while Hina Altaf will be seen in a negative role”. He further added that “It’s not just centered around a guy and a girl; there’s a love track, of course, but that’s not all it’s about. It includes the character of my dadi, played by Samina Ahmed, as well as my taee, played by Saba Hameed and my mother, played by Saba Faisal,” From the BTS pictures too, the serial definitely looks like a family drama.

The serial is penned by Faiza Iftikhar, who has prominent plays like Ranjha Ranjha Kardi, Baba Jani, Dil Lagi, and many other popular ones to her credit so we have some high expectations. Also, the drama is produced by 7th Sky Entertainment, which has a large number of top-rated projects under its belt, which means we are in for some quality entertainment in the next few days as Bandhay Ek Dour Se goes on air.

Here are the first trailers for the drama: