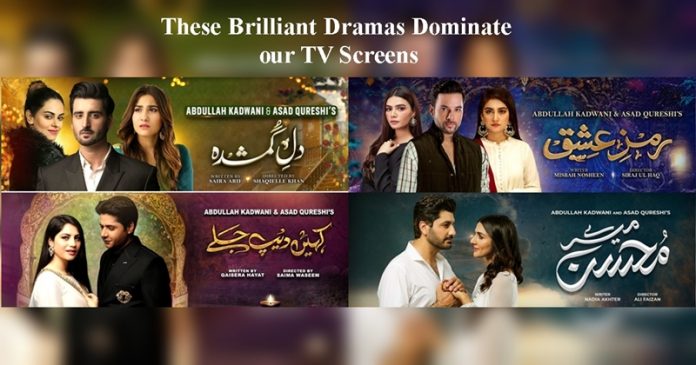 2019 has brought us plenty of TV treats. We’ve shed some tears for Bharosa Pyar Tera, we have been delighted with Romeo Weds Heer, we have learned the ups and downs of relationships with Mere Mohsin, and we have had our fair share of laughter in Shahrukh Ki Saaliyan and Dolly Darling. One thing all these brilliant dramas have in common is that they’ve been produced under the banner of 7th Sky Entertainment.

The best part about these dramas is the fact that they are all airing at once, but each drama has a diverging story, an ensemble cast, and a different theme. All the dramas will take you to a completely different environment, and it keeps the audience hooked with its storyline every day.

Mere Mohsin starring Rabab Hashim as Soha and Syed Jibran as Mohsin is a drama that revolves around two people who happen to come from two different worlds and fall in love. They build their relationship based solely on love but their family commitments, daily life struggles, and their choice to be with each other puts their love to test. The story then proceeds to find out will they stand the test of hardships or will their love crumble under the burden of struggles.

Dil-e-Gumshuda is a story of two cousins, who are poles apart and end up having their lives clash with each other’s. The main leads are not your stereotypical good girl/bad girl characters, but have a lot of dimensions to their personalities. This character development is one of the reasons this drama is breaking all the records and has constantly topped the TRP charts throughout its airing.

Another drama airing right now is Ramz-e-Ishq, a highly qualitative drama with a completely different vibe as compared to all the other dramas being showed on television. It stars Mikaal Zulfiqar, Hiba Bukhari, and Kiran Haq, in a very Mughal eccentric environment with a story about a girl who is mistreated at the hands of her relatives and is forced to pay for the sins she has not done.

Though, the one garnering the audience’s love and critical acclaim the most is Kahin Deep Jalay that has the most unique story. It’s the first-ever drama on the Pakistani television screen to show a precious bond between Rida, the only sister of her 3 brothers. The drama is getting fascinating with the entry of Rida’s sister in law who will be the cause of trouble in her perfect fairytale life. Fans of Neelum Muneer and Imran Ashraf are also desperately waiting to see a romantic yet harsh love tale between the two.

7th Sky Entertainment is bringing out the best in each of the dramas. Their stories, entertaining plot twists, and some wonderful cast chemistry is the reason these dramas have constantly been breaking TRP records, and are chart-toppers this season.

Farhan Akhtar’s WHY COULDN’T IT BE ME’ from ECHOES is...