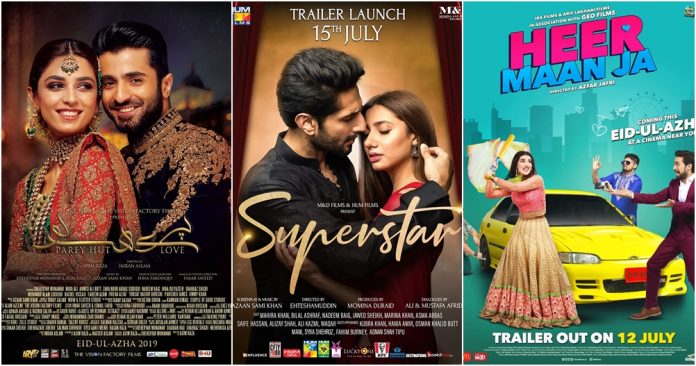 The Interviews, the mall visits, the dance challenges, does it help a film succeed with numbers at the BO? APDP midway analysis for the box office race presents an indepth look in to our films heading for a release this Eid. However we feel, the content and public’s opinion wins at the end of the day. Read on and give your feedback.

Ever since the revival of Pakistani Cinema, the eid releases have become a competitive season for films. A festive period when the public looks for entertainment and our cinema halls are full. Definitely good for our exhibitors, distributors and producers.

However what brings out the public to watch films releasing on eid? (We won’t consider Indian and Hollywood films because frankly there’s no comparison.)
Eid ul fitr proved like a great venture for Wrong No.2 and Challawa and their numbers were at an all time high. Apart from all film content that was released, the film promotions included releasing songs and content online, and countless mall visits, university and college appearances, television interviews definitely aid the effort. We certainly would like to believe the personal interaction with people always helps and connects our entertainment fraternity with the masses, because a film is all about showcasing to the public.

So this season, as announced Paray Hut Love and Heer Maan Ja, made an early presence of film to come out this eid. Shortly HUMFilms came in to the race and placed out Superstar’s release as well. Kaaf Kangana also made a special appearance but backed off early for an October release. So it’s clear from this point on that the race of the box is going to be between PHL, HMJ and SS.

Now let’s compare who’s going all out with their promotional campaign and give them a pat on their back for a superb job. The trailer for all three films have been released and Superstar’s digital mileage has touched 1.5 million views as per our analysis and leads HMJ and PHL with the both the films at 1.4 so it’s quite tight there. Consideing for a late entry in the race from Superstar they’ve caught up quite well and have gone ahead in the race.

Content and song wise Bekaraan the first track from Superstar has gone to 1.7M (a top trend in Pakistan) , In Dinon with 699K Noori at the fastest 1.1M and with their latest Ghalat Fehmi at 359K

It feels like the digital race is competitive between Superstar and HMJ with Superstar having an edge with massive trailer views so congratulations to the team for the effort, and top points for being a late entry in to the game of box office success, and gathering positive reviews. It’s the response of the audience on digital imprint that shows the interest and awareness of a film and it’s demand.

Apart from YouTube mileage the organic digital content from Superstar is getting more reach than the other two films. The fun BTS videos of Mahira Khan and Bilal Ashraf are getting more reach and attention amongst fans. This also speaks of star power and fan following.

Now let’s talk about on ground promotions: Heer Maan Ja and Superstar’s interaction with the public is everywhere. Heer Maan Ja is actively promoting in Karachi while Superstar once again having an edge by covering Punjab area with heavy promotions in Islamabad and Lahore has got a phenomenal response (not bad for a film which has come in late, smart strategy by covering a very important cinema business sector first) and Paray Hut Love has decided to fly off for international promotions after few Karachi appearences. Maybe PHL should’ve wrapped up local promotions first? It’s always safe to consider international promotions once local are done and dealt with. Superstar team has already wrapped up promotions in Islamabad and Lahore and the team is all set for the Karachi promotional campaign and they plan on crushing all competiton. We believe they’ll be flying for international tours once film is released so good job on that front. HMJ is also been agressive and have had an impactful promotional run in Karachi and will probably target Punjab sector. The on ground interaction like we said before is much needed for ticket selling business. Paray Hut has decided to Paray Hut themselves for some reason and we don’t know why. Their promotion team needs to buckle up.

The television appearences, radio plays, the organic viral content for social media are integral for a films promotinal run till it’s final release. At the end of the day for an industry that started with revival, has moved on to survival. Anyhow All Pakistan Drama Page believes in the power of content, if the content of the film is not strong the public and awaam will voice their opinion through box office sales and the result will eventually come out. Eid is the most festive season in Pakistan and our viewers deserve nothing but spectacular content because everyones paying and longing for paisa vasool content at the end of the day.

With not much time left we wish all the films the best of luck and look forward to an increasing agressive campaigns witnessed for the first ever time in the history of Pakistani Cinema.

Fitrat in Review: Character Development is the story’s Biggest Strength