Teefa in Trouble has made rounds in Cinemas across Pakistan from 20th of July, 2018. The start-studded production has received phenomenal response across the country, and even outside of it. 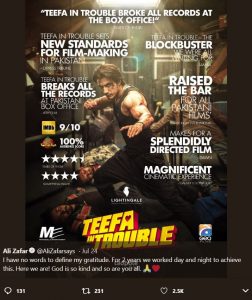 For many, this was an unexpected twist. A lot of people in the fraternity and even outside of it were predicting that Teefayyyyy was not going to be a very huge success (as we all know why but let’s not discuss it).

Teefa in Trouble, though seemed apparently a little troubled before the release- gave us some new Premier and weekly box office goals. But there might be a reason for the constant rise in the earnings of all three weeks, so far…

The movie soon became a highlight among bloggers and reviewers who made sure it was completely trouble-free to watch and spend your money on. This was the first time any movie in the HISTORY of Lollywood has earned so much in Week One.

Now there is always some anxiety among Desi Families when it’s about a Bollywood or Pakistani movie. To make sure the movie was free of any PG content, logic permitted some parents to make this ‘sacrifice’ and watch the movie they had so much heard about. And ofcourse, they had read some reviews but Check karna zaroori hai!

And there you have it: They approved!

Bacha party has been a much ignored audience in Pakistan whenever someone comes up with a movie.

But when your kids are Ziddi and always persistent on going with you, you won’t hestitate showing Teefa in Trouble to them. Any obscene content, if there was, has been completely censored. And ofcourse, our grandma’s won’t be akward either!

The evidence of Bacha and Grandpa approved?

The Parents, Bachay and Burhay went together, bolay tou

Any Success catering to Teefa in trouble has a lot to do with it being not just an entertaining but also audience friendly. There is no doubt in Teefa being a Family movie and except a few hitches, the film has set a new bench mark for Pakistani Film makers to produce the kind of content which gratifies many segments of the market!

‘Aaya Larye’- not the Shady Song of Your Dreams!