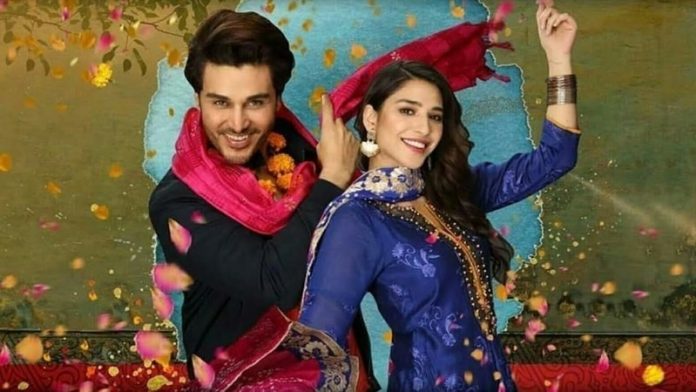 The latest rom-com drama starring Ahsan Khan and Ramsha Khan, Shahrukh ki Saliyaan by 7th Sky Entertainment has been bringing smiles to the viewers since its beginning. The 6th episode of this play has recently been aired and it is another interesting one with plenty of fun-filled moments.

The episode last night begins with Hawaldaar Sahab opening Shahrukh’s Valima card in which his daughter Anoushay’s name is written alongside Shahrukh’s. However, it turns out a moment later that Shahrukh is imagining the entire scenario and that the card has not actually reached him yet.

Meanwhile, Hawaldaar Sahab does receive a letter that everybody prevents him from opening, thinking that it might be the card. Eventually, we discover that it is a work-related letter and everybody heaves a sigh of relief. Ultimately, the card DOES reach Hawaldaar Sahab sometime later and he opens it up, but Shahrukh cleverly makes him believe that coincidentally Gluco’s real name is also Anoushay.

On the other hand, Shahrukh’s parents bring a bunch of jewelry and clothes for Hawaldaar Sahab and his daughters, under the impression that his daughter Anoushay is their daughter-in-law. They are sent to Shahrukh’s room where they meet Gluco and ask him to lift the veil. The scene is hilarious and sent us into a laughter fit as Shahrukh’s parents beat both of them up after the truth is revealed to them.

Ahsan Khan reminds us of his versatility once again with his take on this comedic character, and he fits the role perfectly. Ramsha Khan is also performing her role perfectly and the supporting characters provide all the comedy in the best of manners. Writer Dr. Muhammad Younis Butt deserves all appreciation for penning down such an interesting, lighthearted comedy for the audiences.

The preview of the next episode reveals that the truth will be coming out. Hawaldaar Sahab and his daughters will also find out about Shahrukh’s secret and we can’t wait to see how the story unfolds now!

‘Ghar Titli ka Par’ is floating above our expectations.

All the Reasons why we will Miss the Drama Bandhay Ek...