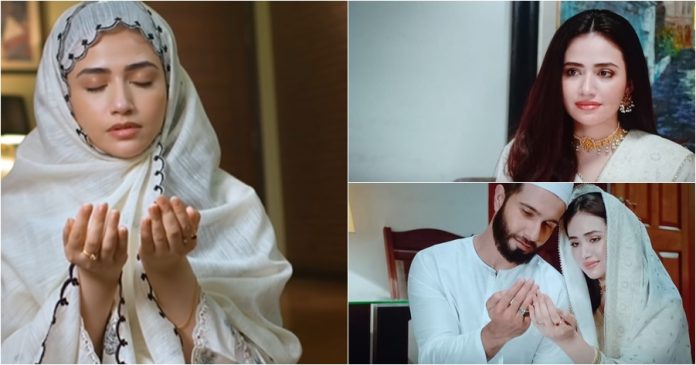 The superstar Sana Javed is currently basking in the glory of her latest block-buster drama Aye Musht e Khaak which has come to a beautiful, fairy-tale end! The actress delivered a stellar performance as the leading lady ‘Dua’ in Musht e Khaak, adding yet another feather in her cap. Javed exudes grace, poise and elegance in her role, from her body language, punchy dialogues to her bespoke gorgeous modest outfits, the diva won over the audiences as Dua and kept them hooked to Aye Musht – e- Khaak’s riveting storyline.

Sana Javed’s ‘Dua’ – A Unique Role That Has Audiences Bowled!

After blockbuster performances in dramas Dunk, Ruswai and Khaani, Javed has once again proved her mettle, essaying a unique role, different from what she has previously done. Aye Musht-e-Khaak is the exceptional story of a pious girl Dua who falls in love with Mustajab aka Bobby a non-believer, he does not hold the same religious values as Dua but is adamant on winning her over at any cost. The unconventional pair, Dua’s innocent and humble self,yet her strong stance on her religious beliefs and Mustajab’s spiritual journey is what made the drama a treat to watch! Audiences lauded her performance and the drama received a phenomenal response with Geo TV bagging the highest TRPs.

The starlet has proved her versatility with her role as Dua which was completely opposite from what she essayed in drama serial Dunk. Dua was definitely a far-cry from Dunk’s heroine ‘Amal’, the vicious, devil-in-disguise role was pulled off effortlessly by Sana Javed just as she has aced the role of the humble, graceful and god-fearing Dua with ease! From her change in expressions to tonality, she sets the bar high with every performance she gives. Sana has proved that she is the reigning queen on television and we’re anxiously waiting for her next project.

Drama serial Aye Mushte Khaak was a breath of fresh air, keeping in mind the usual content featured on Pakistani channels, Aye Musht e Khaak had a great message for its viewers, it covered the teachings of Islam and religious beliefs in a beautiful way. The hero Mustajab’s journey from a non-believer to a believer was wonderfully portrayed alongside Sana Javed’s phenomenal performance as Dua where she embodied Dua perfectly. Dua’s strong values and belief on Allah reminded us that we may plan but Allah surely knows best. Instead of the monotonous storyline on saas-bahu sagas and same-old jealousy between sisters, Aye Musht e Khaak had a profound narrative that gave us something to think about and left behind a meaningful and positive impact on viewers.