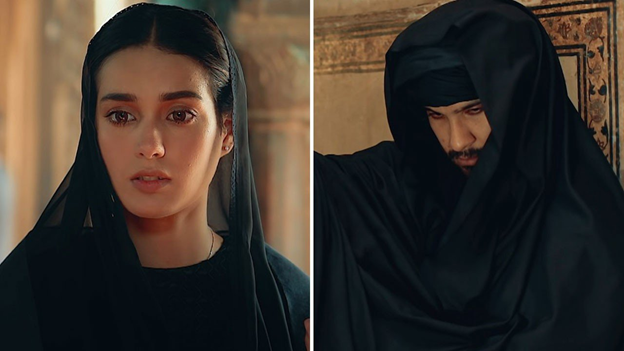 After a long wait, ‘Khuda Aur Muhabbat 3’ will be finally hitting the airwaves soon. It is no doubt one of the highly anticipated dramas of the year and we have been looking forward to its release date since the project was announced some time back. The story of love and spirituality is produced by super hit duo Abdullah Kadwani and Asad Qureshi led 7th Sky Entertainment and is all set to go on air on Geo Entertainment in the upcoming days. Here are some reasons why we are excitedly waiting to watch ‘Khuda Aur Muhabbat 3’:

Khuda Aur Muhabbat’s first two seasons been amazing and were loved a lot by the audience.  The previous seasons have raised our expectations high for the new season since we expect the same magic this time too. Even though we are aware of the basic concept of the story and that it would feature a spiritual journey alongside a love story like the previous two installments, we are waiting to see how they have executed it and what they have in store for us this time.

The teasers have left us intrigued, impressed, and wanting it to hit the airwaves

The teasers of ‘Khuda Aur Muhabbat 3’ were nothing short of impressive and intriguing. They did not reveal anything significant about the story but still looked quite promising. We can expect some power-packed performances with some wholesome entertainment as the new season goes on air.

Feroz Khan and Iqra Aziz are pairing up and sharing the screen for the first time and this gives us another major reason to wait for the drama. Both the actors have a powerful screen presence and some phenomenal performances to their credit. The talented and versatile actors know how to nail any look and the teasers reveal that this time too, they are not going to disappoint.

It has an ensemble cast

Besides Iqra Aziz and Feroz Khan as the lead pair, the cast of Khuda Aur Mohabbat Season 3 also includes Junaid Khan, Javed Sheikh, Tooba Siddiqui, Sunita Marshall, Rubina Ashraf, Asma Abbass, Usman Peerzada, Seemi Pasha, Zain Baig and Sohail Sameer. All the actors have proven their mettle in the entertainment industry with their commendable performances, and we are excited to see what roles they are playing in the serial.

It has a strong plot exploring love and spirituality

It is already known that ‘Khuda Aur Muhabbat’ has a strong plot exploring love and spirituality, like the previous seasons of the drama. The previous seasons were loved for the manner they showed this exploration journey and this time too we are expecting the same. Scenes from a shrine and a railway station paired with poetic lines tell you that it’s going to be an interesting journey over all while the cinematic visuals, too, are a boost to the project.

Directed by Wajahat Hussain and written by Hashim Nadeem under the production of Abdullah Kadwani and Asad Qureshi’s 7th Sky Entertainment, ‘Khuda Aur Muhabbat has a strong team. 7th Sky Entertainment has become a household name for the quality content they bring to us every day. They have done a commendable job by producing dramas that cover all kinds of topics that keep us glued to our screens. The much-awaited drama ‘Khuda Aur Muhabbat’ is also expected to make it to their list of blockbuster serials and has the potential to win our hearts as the teasers suggest. Hence, we are excitedly looking for it to go on air.

Are you excited for this serial? Share your thoughts in the comments section below.

Cheekh – Episode 15: Wajih Doesn’t Seem to be Backing Down