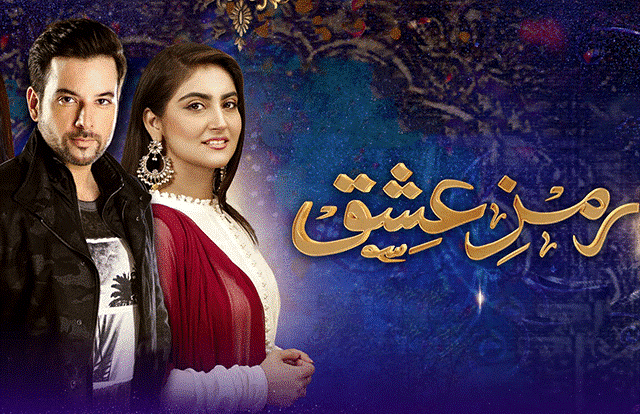 Under the banner of 7th Sky Entertainment, drama serial Ramz-e-Ishq is progressing with a happening storyline. With its 6th episode being recently aired, the story proceeds at a steady pace, keeping it emotional and intriguing at the same time.

After the lovebirds Roshni (Hiba Bukhari) and Rayaan (Mikaal Zulfiqar) succumb to family pressures and complications, Rayaan left Roshni alone at the mercy of her grandfather and had disappeared off to another country. However, now that he has returned, the world he had left behind seems upside down to him.

The episode starts with Hashmat Ali suffering from a sudden heart attack, after a huge bout of grief and regret. Safia and Ayesha argue in the hospital corridors about whom to blame for his condition, however, we do believe he deserved it after all his heartless atrocities against Roshni.

Meanwhile Roshni begs her mother to forgive her and listen to her once. Terribly disheartened, Khadija ignores her daughter’s plea and asks her to go back to the life that she had chosen for herself. Alas! Helplessness becomes their fate.

Rayaan finally decides to come back and what he witnesses there is heart wrenching. He sees Roshni in the kitchen, working like a maid. It was pretty surprising that Rania reveals the truth to him about what led to these circumstances and doesn’t manipulate the story instead. Despite being arrogant and proud, Rania doesn’t seem to be as clever as her mother Safia, otherwise she could have made something up to spoil Rayaan’s feelings for Roshni.

In fury Rayaan tries to blame Roshni for letting herself get into this miserable situation instead of fighting for herself, whereas she makes him realize that he made a big mistake when he left her alone to fend for herself.

When you come to think of it, Rayaan’s idea to cut off all forms of contact with his family was rather senseless and childish. And now, seeing Roshni with Omer becomes a constant source of pain for Rayaan and he fails to convince Roshni to be at his side once again. He has to face the facts and deal with them somehow now.

Overall the story has a new mission now – how to get Roshni back together with Rayaan! It seems like an impossible task, what with her resilience and stubbornness towards accepting her fate as it is. Roshni challenges her sick grandfather Hashmat Ali to try her patience more, since that’s what he had decided to do initially, but he keeps on pleading her for a second chance.

Will Rayaan ever find his way back to his lost love again? To find out, stay tuned for the next episode of Ramz-e-Ishq.