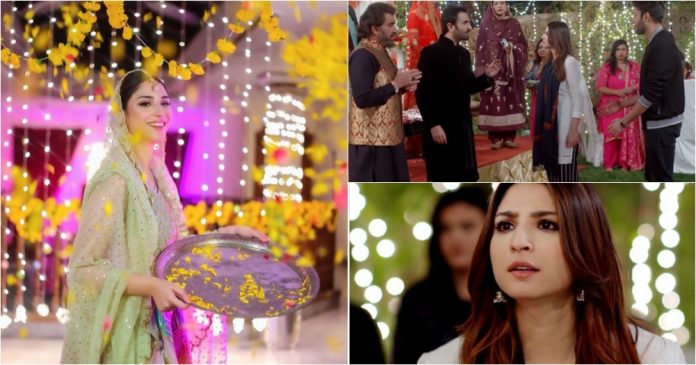 One of the dramas that have caught our attention recently for its intriguing script and fun and comedic moments is Shehnai. Starring Affan Waheed and Ramsha Khan as the lead pair, the drama has it all to keep us hooked and the latest episode further has us invested in the story. The fifth episode of the drama was nothing but a perfect blend of emotions and drama combined with some light-hearted moments to make it a thoroughly enjoying episode.

So, the episode began with Bakht ‘running away’ from her house to get married to Hunain but little did she know that Hunain was never serious about her and would never turn up at the station. Since Meerab knew what was awaiting Bakht as Hunain was never going to fulfill his promises with Bakht, he accompanied her. After Hunain does not turn up, Bakht decides to go to his place with Meerab to check upon him but finds out that Hunain was getting married to someone else who was financially beneficial for him. Bakht gives him a piece of her mind, exposes him in front of everyone and leaves.

On the other hand, at Bakht’s place, everyone finds out about Bakht’s leaving and there is a lot of drama that takes place henceforth that goes on to the sensitive matter of property distribution. However, after Bakht’s return, the youngsters come up with a version of their story to turn things in Bakht’s favor.

Overall, it was a truly power-packed episode of Shehnai with one interesting thing happening after another. Ramsha Khan stole the show along with Affan Waheed with their phenomenal performances. No doubt, the episode got appreciation and praises from all corners and was loved by all.

Ramsha Khan was a sight to see in that particular scene in which she confronted Hunain, and fans loved how she came out strong after finding out the truth.

So many fans loved that particular scene in the episode that they couldn’t help praise Bakht’s reaction and Ramsha Khan’s powerful performance in it.

A lot of people love the on-screen chemistry between the lead pair Ramsha and Affan Waheed and find them adorable, and we agree!

And now, we are all waiting for the next episode as it seems that Bakht would want to go ahead with her planned marriage with Meerab.

Eagerly waiting to find out how Meerab will react and how the story will unfold next.

Twitter brimming with #saynotowar trends across the borders along with #gobackmodi...