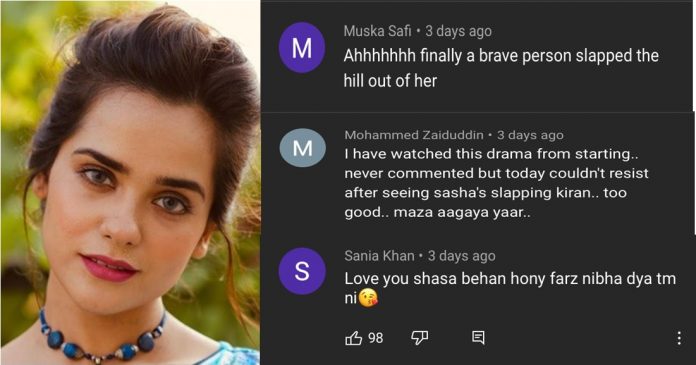 It wouldn’t be wrong to say that Rabya Kulsoom has been killing it lately. The young starlet has been making all the right choices and is a part of several exciting projects at the moment. Even though she has only entered the entertainment industry few years ago, the actress has won over people with her acting prowess. Viewers and critics alike have praised her for her onscreen presence, impeccable dialogue delivery, her command over every character she plays, and her ability to strike chemistry with each one of her co-stars. Apart from that, Kulsoom style statement, and gorgeous looks have also been appreciated by her fans every now and then.

Currently, the actress can be seen playing the character of Sasha in the hit romantic drama Bharaas that airs on ARY Digital. The show is about how far one can go for the sake of one’s own benefit and how many lives we can ruin along the way. In Bharaas, Kulsoom essays Sasha with an utmost honesty and sincerity. Sasha is a spunky, headstrong but well intentioned girl who loves her family. She is protective about the people she loves, and is always ready to stand in the way of anyone who want to bring harm to her dear ones.

In the show’s teaser for the upcoming episode, Sasha is seen slapping Kiran after she comes to know about how Kiran has been disrespecting her mother, and making her family’s life a living hell. The moment was declared the best of the entire episode by a lot of the viewers. On YouTube, the scene also became the most repeatedly watched moment of the episode.

Here are few of the comments that were made about the episode:

Some of the comments were simply hilarious and viewers openly expressed their liking of the scene.

Some even declared the scene, the best scene of the entire drama, while others confessed of watching the scene over and over again.

And that’s just a few of the hundreds of other comments that praised Sasha, and Kulsoom’s brilliant acting in the show and this particular episode. It is safe to say that Sasha is the firecracker sister who will always be there to protect her family from harm’s way. What will Sasha do next? How will Kiran respond to the slap? To find out, keep watching Bharaas every Tuesday, only on ARY Digital.

‘Ghar Titli ka Par’ is floating above our expectations.