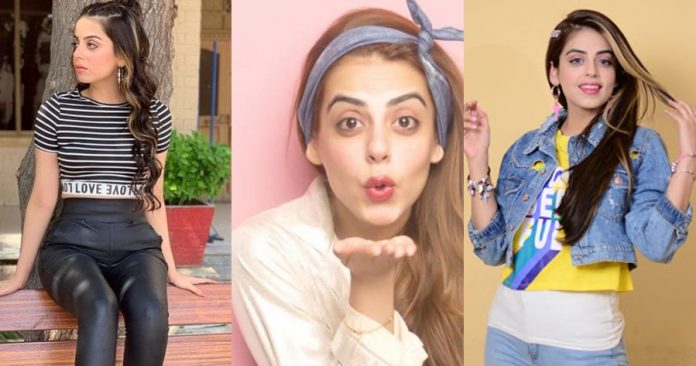 Pakistani actress and YouTube sensation Yashma Gill is indeed a rising star. The actress has made a name for herself among a heap of aspiring TV actors in a very short period due to her unmatched talent and versatility. Having garnered acclaim for her roles in Qurban, Ghar Titli Ka Par, Ki Jaana Main Kaun, Piya Naam Ka Diya, and the ongoing “Alif,” Yashma Gill has proven her acting prowess time and again.

Alongside appearing in the star-studded show, Alif, Gill now also stars in a titular role alongside Bilal Abbas Khan and Yumna Zaidi in the new drama serial Pyar Ke Sadqay. Produced under the banner of Moomal Productions, the light-hearted serial is directed by Farooq Rind and is currently on air on Hum TV.

The play mainly revolves around teenage romance and brings it back to our screens after ages. There are three main characters in the story: Abdullah (Bilal Abbas), Mahjabeen (Yumna Zaidi), and Shanzay (Yashma Gill). While Abdullah is shown as a perfect match for Mahajabeen because both of them are odd, not interested in studies and wish to get married soon, he is currently shown to be fascinated by Shanzay, a vivacious girl in his University who thinks of him as a weird guy just like others.

Abdullah shares his feelings for that girl with her sister who suggests him to confess his feelings for her. On his sister’s insistence, Abdullah finds out the courage to propose Shanzay, but the girl has not a tad bit of interest in him. At first, she gets stunned, but later she starts getting irritated with his continuous calls from random numbers.

Yashma Gill is nailing her role as the modern and intelligent Shanzay, who is a bright student, unlike Abdullah. Shanzay looks down upon Abdullah because of his poor academic record and feels pity for him but was on friendly terms with him until Abdullah took the chance to propose her. Now she feels irritated and kind of angry at Abdullah.

Gill has stolen the show in all the episodes so far. From her flawless dialogue delivery to her on-point facial expressions to her cute makeover in each scene, Gill has just impressed the audience with her bubbly character in Pyar Ke Sadqay. Bringing her unmatched energy in the drama, and playing a character that stands out, Gill is not only garnering love from the audience, but is also getting rave reviews and appreciation from critics for her performance.

Earlier before the show went on air Gill had said in an interview with local media that when she had read the script, the character clicked to her, and she wanted to take it up. She also mentioned that essaying Shanzay was challenging because the girl has a lot of dimensions to her personality.

While we have just seen Shanzay in a few short scenes as of now, we are looking forward to seeing more of her to watch more dimensions of this character that Gill has portrayed brilliantly on screen.