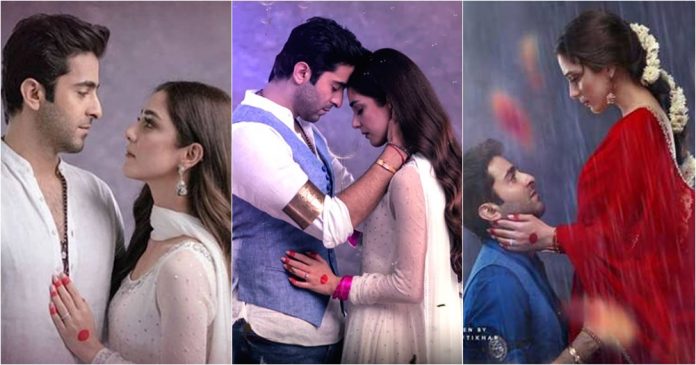 Maya Ali and Sheheryar Munaver star in our very own version of Romeo & Juliet as Rakhshi and Aslam, ‘Pehli Si Muhabat’ the love story that started off by sweeping us off our feet has now turned into a heart-wrenching tear-jerker. The unexpected death of Uzma Hassan’s ‘Zainab’ due to the ultimate heart-break has us grieving for an on-screen character like never before!

The last two episodes of Pehli Si Muhabbat have been surrounded by grief and sadness, with Zainab’s untimely death leaving everyone shocked, the events that led to her death were equally disturbing to say the least. With being pressurized to leave Murad by her ex-beau Sikander (Salim Meraj), Zainab was eager to help Aslam and Rakhshi in any way possible, she even arranged for Rakhshi to run away with Aslam but that didn’t work out either. With her ‘dil ka tukra’ Aslam on one side and her new found love for her husband Murad on the other, the anguish of choosing one over the other killed her from the inside. A grief-stricken Murad (Paras Masroor) wept for his wife as she left him all alone in this world for the next.

On the other hand, the only good thing to come out of this tragic incident was Rakhshi’s marriage to Sikander was called off after Sikander disappeared when he heard of Zainab’s demise. In order to avoid any further embarrassment and to protect his family’s honour, Faizullah (Shabbir Jan) announces that Aslam should come and marry Rakhshi within 24 hours, however Akram (HSY) says he can either bury his sister or take Aslam’s wedding party to Faizullah’s house but can’t manage to do them both. The only hope we had of Rakhshi and Aslam’s happy ending seems to be fading away once again. Faizullah’s helplessness is noticed by all and their neighbour Asif’s sister decides to pay them a visit and ask for Rakhshi’s hand in marriage for her brother, a man much older to Rakhshi with a teenage daughter too! Nargis (Rabia Butt) was shocked to hear of this and fiercely opposed this proposal!

Just when Zainab had finally accepted her love for Murad after all these years of being married to him, it was time for her to say goodbye to him. The bitter-sweet realisation that she died but not before accepting how much she loved Murad and not Sikander has been a form of a solace for the viewers. However, to not witness them coming together and living their happily ever after has definitely got us feeling in the dumps! Kudos to Uzma Hassan who may not have been the leading actor in the story but definitely stole the spotlight as ‘Zainab’ and her on-screen husband played by Paras Masroor, the tragedy of his life, loving a person who never loved him back was phenomenally essayed by him as ‘Murad’.

Pehli Si Muhabat Portrays the Hidden Realities of our Society!

Incomplete love-stories are common in our society, parents are not willing to marry off their children to someone of their own choosing and instead force them to marry through emotionally blackmailing them. The issue of honour and keeping up the family name arises time and time again especially when daughters and sisters are involved, in the case of Zainab, years ago, her brother Akram decided she was better off unhappy with Murad rather than marry the love off her life Sikander as it would ruin their reputation. While in Rakhshi’s case her father didn’t find any faults in marrying her off to Sikander, a man much older to her instead of Aslam a boy she was madly in love with only because ‘Log kya kahengay?’

Will Aslam refuse to marry Rakhshi?

The next episode’s sneak peek shows a very distraught Aslam crying over his sister’s death, blaming Rakhshi for her death, while Faizullah gives Rakhshi an ultimatum, will he force her into marrying their neighbour Asif? Keep watching Pehli Si Muhabbat on ARY Digital, every Saturday at 8 PM.

These Brilliant Dramas Dominate our TV Screens this Season!