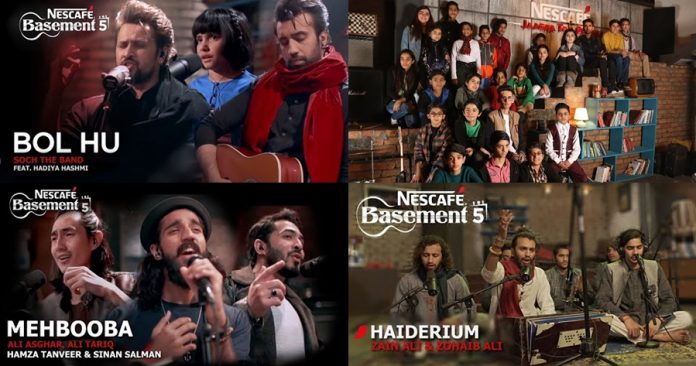 Alas! Nescafe basement is back with a bang… With Xulfi in the background stealing the show (like he does every time!) 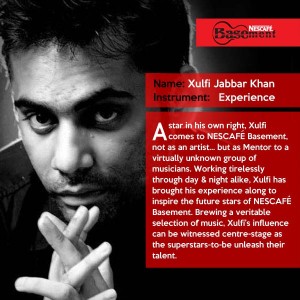 We had great hopes from this year’s season of Nescafe Basement, and it would be pertinent to say, “no aspirations were harmed in the process!”. For we are not even half way through the season, yet we can say it with utmost conviction that Nescafe Basement season 5 just stole our hearts away! All the while giving our playlists a major makeover… 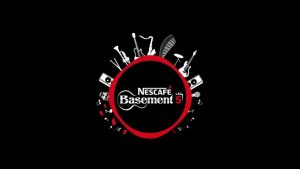 So lets take a quick recap of the episodes which have been aired so far in order to establish what has Nescafe Basement season 5 given to Pakistan’s music industry to date.

1) Makeover of the surtaal Music academy

Legend has it that Xulfi , the great music director found a hidden gem in the form of a small musical academy, practically camouflaged amidst the downtrodden pockets of the society. Run by an even more talented musician Xia-ul-Haq, “Surtaal Music Academy” consisted of a  squad of young students, who trained not only their vocals in order to sing but also honed their skills to play a variety of instruments, thus playing a crucial role in preventing the extinction of the endangered musical instruments.

Xulfi realized the need to revamp this academy in order to encourage the creation of such musical institutes and tadaaa… The kids now have a vibrant place to practice their skills all thanks to the Nescafe Basement team!

2) Bringing out younger talent such as hadia!

Lets just admit it, we have all seen and listened to this young soul filled with an energy one can expect only from big names in the music industry. Hadia Hashim, an eight year old was discovered in the “Surtaal Music Academy” during the auditions and was selected along with eight other kids to become part of an inspiring journey with Nescafe Basement season 5. People are already calling her the future Abida Parveen for Pakistan!

Oh boy, Nescafe Basement’s soulful rendition to the song “Bol Hu” sent shivers running down our spine! Sung by Adnan and Hadia, the song features a soul searching journey of belief and devotion and had us all tearful by the end.

Going virtually against the celebrity culture which is promoted at Coke Studio, Nescafe Basement is a show led by youngsters of all ages. Students from all over Pakistan are encouraged to send in their auditions in the form of voice recordings, from which the experts of team Nescafe Basement selects a chosen few. So yep, its a platform intended to introduce only new faces in the industry and provide them a stage to outshine all others…

“This is the main aim of NESCAFÉ basement: to create a future for the music industry of Pakistan. And this young generation is the future,” Xulfi said.

Given by the eminent failure of Coke Studio at producing something worth our while, they can do better by taking some inspiration from Nescafe Basement. Instead of calling in celebs whose talent is evidently not singing in order to give a surge to their ratings, Coke Studio should now revise their strategy and look to introduce younger talent.

BTW, did you know the budget for the entire season of Nescafe Basement is typically less than that of a single episode of Coke Studio?

4) Telling us that covers of hit songs can be made without ruining them!

Have you listened to the Nescafe Basement’s cover for “Mehbooba”, a song originally sung by Haroon? If not, check this out before you proceed!

Oh and its rare that after a cover, the original singer praises the newer lot instead of suing them! Just imagine what a moment it must have been for these kids when Haroon himself took to twitter in order to congratulate them on their effort!

Under normal circumstances, we would have asked you by now to listen again to Ahad Raza Mir’s rendition of the famous song “Ko Ko Korina” in Coke Studio, if we had no pity for your ears!

5) Giving us an all kids band!

Last year’s Nescafe Basement gave us an “all girl’s band” which made amazing contributions to the music industry through their beautiful covers. This year, Xulfi took the concept one step further and introduced an “all kid’s band” who absolutely rocked the stage through their marvelous rendition of Fakhr-e-Alam, Fringe Benefits and Yasir Akhtar’s 90’s hit Pyar Diyan Gallaan.

Who knew we had such great talent in Pakistan! This is the response these kids have been getting so far!

Just realized, first it was "all girls band* and now *all kids band*.! They definitely know how to keep up with their game! @zulfiqarjkhan #nescafebasement5

These kids are such badass ROCKSTARS! Love, love, LOVE this rendition. #Nescafebasement5 you have floored Pakistan with this one.

Not only them, but Nescafe Basement’s initiative has been receiving praise from celebrities too.This is what the famous and extremely versatile actor, Hamza Ali Abbasi has to say:

Some 1 in my family randomly made me listen to some songs of NESCAFE BASEMENT 5 & I AM NOW A FAN! Amazing/Brilliant music with some new fresh talent who deserves every bit to get on screen & get the exposure/appreciation. BRAVO NESCAFE BASEMENT & everyone who took part in it.

Thank you Nescafe Basement for reviving the lost soul of music in Pakistan and for providing these youngsters with a chance to up their game in the industry, through sheer talent and hard work.

“The world will one day recognize Pakistan’s efforts towards creating good music.” Xulfi

And when it does, your efforts would be recognized in bold letters! All the very best for your upcoming ventures!