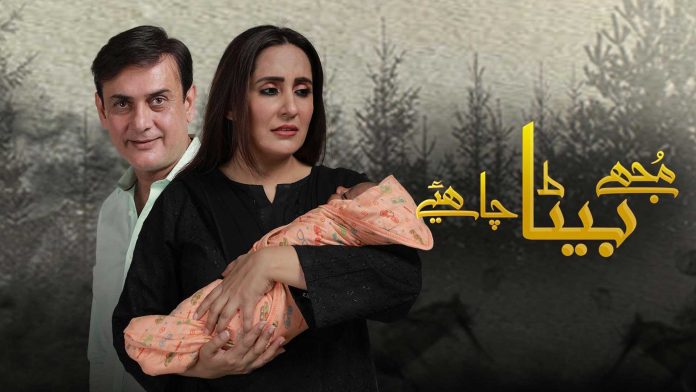 Mujhey Beta Chahiye is a drama that airs on A Plus entertainment and is getting a lot of recognition for raising the issue of gender discrimination, that has been there for decades and unfortunately still prevails in our society. This drama project by Sadia Jabbar Productions has carefully tailored a strong story around this issue so that it is entertaining as well as commits to giving a social message.

Written by Abdul Khaliq Khan and directed by Asim Ali, the drama stars Shagufta Ejaz, Sabreen Hisbani, Shahood Alvi and Aiza Awan. This veteran group of actors has shown a tremendous performance throughout the drama keeping the audience highly intact.

The story of Mujhey Beta Chahiye shows the life of Salman and Rubina who have 2 beautiful little daughters. Initially the couple are very happy and they both love their daughters to their heart’s content but soon Salman’s desire for a son starts taking its toll on him. When he has a third daughter that’s when his desire takes a negative impact on him. Taking this desire as his weakness, Jahan Ara and her mother start brainwashing him. Young and beautiful; Jahan Ara succeeds in trapping Salman in her love spell and seduces him to spend the night with her. This leads Salman vulnerable in the hands of Jahan Ara, and he marries her for honor as well as in hopes of having a son.

The drama has progressed very carefully with each episode full of strong story development and great acting to support it.

Throughout the drama we see how Salman keeps Jahan Ara at a high status in his house just because she keeps talking about giving him a son while Rubina is constantly degraded and treated as a servant. Many scenes also show how Rubina’s character is disgraced and even though Rubina considers Imran as his brother, it becomes a reason to disgrace her character.

One of the best scenes so far in the drama was when Rubina spends the night crying, yet in the morning she stands strong in front of Jahan Ara. She is still hopeful and still strong. Salman is brainwashed into believing that Rubina and Imran have unsolicited meetings and he throws Rubina and her daughters out of the house. Rubina ends up at Imran’s house with her daughters as she has nowhere else to go. This provides Jahan Ara the perfect opportunity to add fuel to the fire, as she disgraces Rubina’s character even more now.

Mujhey Beta Chahiye has done a remarkable job in making an intense drama on a very fragile social problem. Our society still deems daughters as unfortunate and a woman who only gives birth to daughters is not given the respect that they deserve. Through this drama, Sadia Jabbar wants to change this mindset and hopefully we can come out of this evil prevailing in our society.

Kudos to Fawad Khan and Wife, Sadaf on their 13th Anniversary!