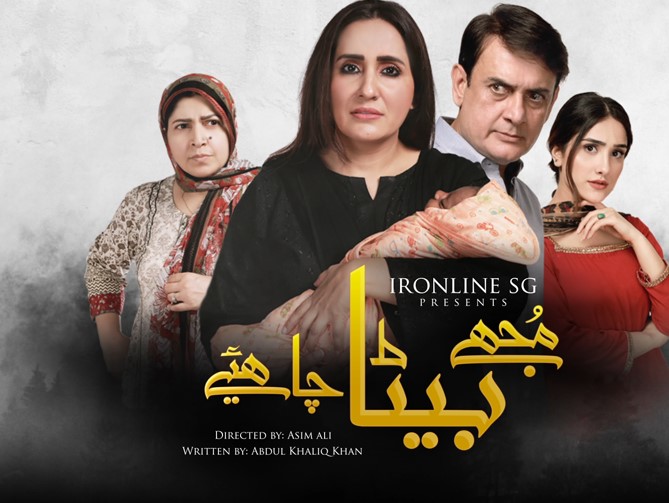 Directed by Asim Ali and scripted by Abdul Khaliq Khan, Mujhe Beta Chahiye, as the title suggests, brings to light how the birth of a boy is still preferred over the birth of a girl in this society. A brilliantly thought-provoking project by Sadia Jabbar Productions, the new drama serial stars veteran actors like Shagufta Ejaz, Sabreen Hisbani, Shahood Alvi and Aiza Awan in pivotal roles. The drama serial portrays the mindset of some people who consider the birth of a baby girl as a matter of disgrace. Though many of us, who belong to progressive mindsets would deny this reality, but it is a fact that there still exist families who consider the birth of a baby boy a step up in the society as compared to that of a girl.

In the second episode of Mujhe Beta Chahiye, we see Shareefan and Jahan Ara landing in Salman and Rubina’s house. While Salman and Rubina are living a happily married life and expecting the birth of their third child soon, Shareefan and Jahan Ara are planning to break their marriage and manipulate Salman to get married to Jahan Ara. For this purpose, they plan to exploit the fact that Rubina has two daughters and from the looks of it, Shareefan guesses that the third one might be a daughter too.

On one hand, Salman loves his daughters a lot, but deep down he also has the desire of a baby boy. When the doctor tells him that it’s going to be a boy as per the ultrasound report, the happiness on his face, the manner in which he distributes mithai, and the way he sets the room to welcome the baby clearly shows how he always wanted to have a son. Shahood Alvi is quite impressive as Salman and his expressions are on point in all the scenes. Sabreen Hisbani seems quite comfortable in the role she is playing and Shagufta Ejaz also plays her character really well.

The preview of the next episode suggests that things might take a turn in the life of Salman and Rubina, and Shareefan might exploit it in the best of manner. Let’s see how the story unfolds henceforth.

Mujhey Beta Chahiye – A Project of Sadia Jabbar Productions is...