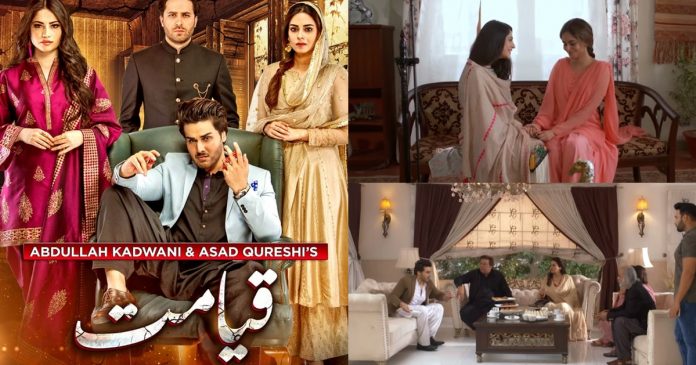 The enticing teasers of 7th Sky Entertainment’s new drama serial ‘Qayamat’ had us looking forward to it since many days, and as the first episode went on air last night, it did not disappoint us even a bit. The serial replaced another popular drama serial ‘Raaz-e-Ulfat’ at the 8PM slot on Tuesday. Penned down by Sarwat Nazeer, directed by Ali Faizan, and produced by ace producers Abdullah Kadwani and Asad Qureshi, the drama features some talented and versatile actors. These include Ahsan Khan, Neelum Munir, Saba Faisal, Amar Khan, Haroon Shahid, Shabbir Jan, Noor ul Hasan, and many others.

The first episode of the serial introduced us to most of the leading characters. We were introduced to Ifrah (Neelum Munir) and Samrah (Amar Khan) and their parents. The sisters are poles apart from each other in nature but share a strong bond. Ifrah is a cheerful and bubbly girl who does not shy away from voicing her opinion and is good at debates. On the other hand, Samrah is a shy, quiet and submissive girl. Ifrah and Samrah belong to a lower middle class family but their parents have given them education and are now looking for good proposals for them. Ifrah and Samrah’s friend Saira has a brother who likes Samrah a lot and wants to marry her and the preview of the next episode suggests that he will send a formal proposal.

On the other hand, Ifrah and Samrah has a paternal uncle Mukhtar (Shabbir Jan), who is rich but has a misbehaving and loafer son Rashid (Ahsan Khan). Rashid’s mother (Saba Faisal) has a huge role to play in spoiling him and she is now looking for an educated and simple daughter-in-law for his good-for-nothing son. Rashid is also arrogant and violent man who gets angry at every next instant.

Overall, it was a nice opening episode that introduced all the characters with great detail and clarity. Neelum Munir and Ahsan Khan stole the show with their commendable performances, while the storyline also looks like a promising one that makes us look for more of it. The serial has all the potential to become another of the blockbuster serials by 7th Sky Entertainment as it started with a bang making our expectations sky-high for the upcoming episodes. The powerful duo Abdullah Kadwani and Asad Qureshi are never left behind in giving a spectacular entertainment serial.

Have you watched the first episode of Qayamat? What are your views about it?

A Cheekh Resonating With an Epic Face Off : Cheekh Episode...