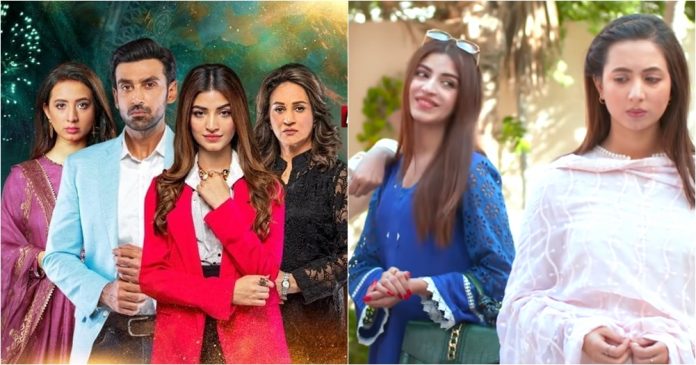 Amidst the various narratives on air these days for the 9PM slot, 7th Sky Entertainment’s drama serial Mohlat on Geo Entertainment has become an audience favorite. Produced by the dynamic duo of Abdullah Kadwani and Asad Qureshi, directed by Saima Waseem and, penned down by Samira Fazal, the serial offers a lot of drama and action every day.

The drama features an ensemble cast of Sami Khan, Kinza Hashmi, Komal Aziz, Usama Khan, Sabeena Farooq, Asma Abbas, and Bushra Ansari in pivotal roles. As a result, it is topping the TRPs chart on a regular basis.

The plot of the drama revolves mainly around three sisters, Maham (Kinza Hashmi), Rida (Sabeena Farooq), and Nawera (Komal Aziz) and their cousin Dawar (Sami Khan), who is married to Maham. Maham, the eldest of the three sisters is a proud, selfish and materialistic girl who likes to get her own way. On the other hand, the youngest of the sisters, Nawera is a loving and caring girl, who has been subjected to neglect and abandonment since birth as she is held responsible for her father’s second marriage to have a son. Nawera, however, bears everything with patience but Rida motivates her to stand up for herself and explore her talents. Meanwhile, Rida gets ill and is diagnosed with brain tumor.

The drama explores various themes including gender inequality, greed, deception, revenge etc. Penned down by Samira Fazal and directed by Saima Waseem, Mohlat has gripped the audience’s attention since its first episode went on air. It kicked off with an extraordinary start and lead the local entertainment channels with top TRPs for the time slot.

As the story progressed, it has kept us on the edge and has successfully maintained the leading run with impressive ratings every day.

Last week we saw the serial setting new benchmarks with its performance on the TRP charts.

Twenty one episodes down, and the drama has kept us hooked with one intriguing episode after another. The TRP ratings it is getting speak volumes about its success and popularity among the audience. The serial has the potential to continue its winning streak as Mohlat still has a lot in store for us, and we are eagerly looking forward to find out how the story unfolds.