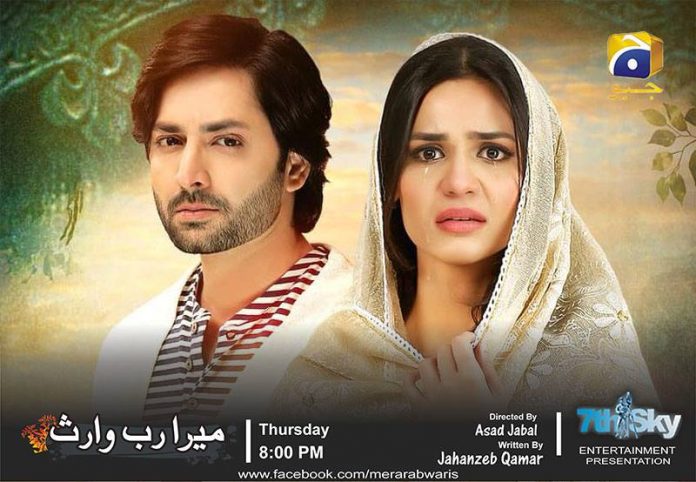 Written by Jahanzeb Qamar and directed by Asad Jabal, Mera Rab Waris is a fantastic project by 7th Sky Entertainment and has captivated its viewers since the very first episode. Although the drama is halfway through, the storyline keeps getting better every week.

Similarly, this week’s episode was full of twists and new challenges for the characters. While Ayesha and Haris’s relationship is a bit rocky since Aylla entered their lives, Faizi decides to take a big leap of faith by deciding to marry Nimra. However, Kinza and Mazhar believe that his decision is based on lies and he will betray Nimra in the end. Meanwhile, Ayesha and her mother-in-law have brought their conflicts out in the open.

Madiha Imam as Ayesha delivers exceptional performance every week and it was no different this time around. Her facial expressions portray accurately the agony that her character is facing. On the other hand, Faizi played by Mirza Zain Baig is going through a major transformation. In the beginning of the drama, he was a soft-spoken, happy-go-lucky kind of a guy but lately, he has become more mature and sensible. Similarly, the supporting cast is equally tremendous and have played their respective characters with perfection. The characters of Nimra and Kinzi, played by Anumta Qureshi and Hira Hussain are also commendable.

Now that Faizi is also married, it will be interesting to see how the story progresses. Will he ever be a part of Ayesha’s life? Only time will tell.

Main Hari Piya is all set to hit your TV screens!