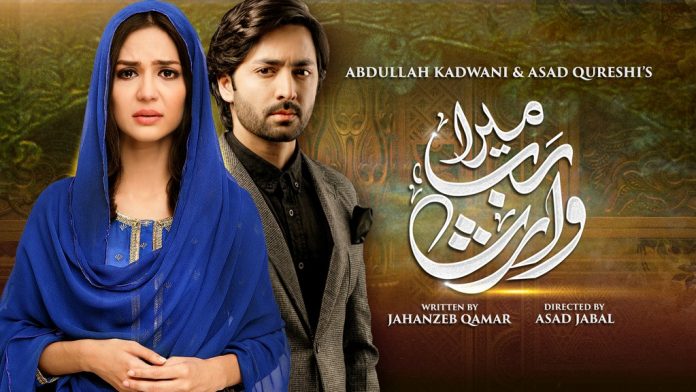 Mera Rab Waris has been airing on Geo Entertainment and has received huge reception from everyone because of its bold story. With an ensemble cast starring Danish Taimoor as Haris and Madiha Imam as Ayesha in lead roles, Mera Rab Waris shows how two different people from different backgrounds come together and the consequences of living in a society that does not tolerate your different views.

With strikingly different personalities, Haris is portrayed as a flamboyant, outgoing, and liberal kind of a guy while Ayesha is an innocent girl who has high religious values. When Haris falls in love with Ayesha, this is when two different people come together to make one beautiful world.

One after the other, Ayesha is faced with situations but Haris’s support keeps her going. In the last few episodes, the final stroke on Ayesha’s character raised by Mazhar made the story complicated. For many episodes, we simply couldn’t handle how Haris sent Ayesha away, breaking her complete faith and trust on him.

Though, Mera Rab Waris continued to portray, that faith in your Rab should be stronger than everything. In the end, when everything turned out perfect for Ayesha despite coming to a near death experience, it was clear that everything that she had managed to escape was because of her complete faith in her Rab.

Many times, dramas simply end without giving much insight to the story and audience is left with questions. Mera Rab Waris on the other hand totally justified the ending garnering appreciation and praises from the audience.

We loved the fact that Ayesha’s innocence was proven to everyone who were against her and that Haris realized his mistakes and returned back to Ayesha with even more love and respect.

Mazhar’s greed for more money took away whatever he had, which was beautifully portrayed. Moreover, the fact that Kinzi did not move back with him showed that he did not only lose money, he also lost a loving wife because of his greed.

It has been a splendid journey with Mera Rab Waris and a justified ending to such a great story by 7th Sky Entertainment. Mera Rab Waris is another gem to be added to 7th Sky Entertainment’s list of successful blockbusters and we just want to appreciate Abdullah Kadwani and Asad Qureshi for giving us such a legendary drama. The producers duo have made some of the most historic dramas of this era, which will be remembered for generations to come, and Mera Rab Waris is one of them because it has left us all with such good vibes.

Hareem Farooq Went Live on Her Instagram and Here is Everything...

Muqaddar in Review: Intriguing and Full of Emotions