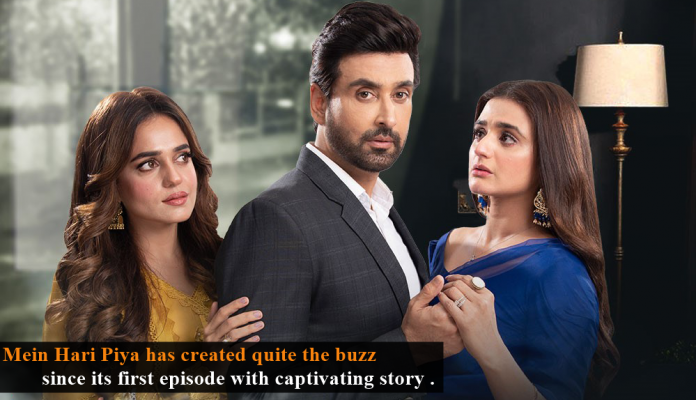 ARY Digital’s drama serial Mein Hari Piya has created quite the buzz since its first episode, 27 episodes later the story has got us hooked with a gripping plot and some remarkable performances by members of the cast. Mein Hari Piya features Sami Khan, Hira Mani and Sumbul Iqbal Khan in the leading roles while Marina Khan, Maira Khan, Hamza Sohail, Ayaz Samoo, Shaista Jabeen and Hassan Niazi make-up the supporting cast. The drama is produced under the banner of Big Bang Entertainment, directed by Badar Mehmood who has blockbuster dramas including Ishqiya, Cheenkh and Dunk under his belt and is penned down by Qaisra Hayat.

The drama follows the story of Sara (Hira Mani) and Fawad (Sami Khan), a happily married couple who are the ideal couple for all, after seven years of wedded bliss the couple is still in love just as they were on the first day they met. Many are envious of their happiness and Fawad’s sister Maria (Maira Khan) leaves no stone unturned to remind Sara of her being unfortunate in the biggest aspect of life- having children. She ensures Sara feels guilty for not being able to bear children and Maira is always looking for ways to turn her mother (Marina Khan) against Sara too. In a turn of events, Maira is successful and proves that Sara is infertile, Amma Jaan (Marina Khan) convinces her to give Fawad permission to get married again for the sake of having a child of his own.

Sara Digs a hole for Herself

Sara feels incomplete as a woman since she is unable to have children, the pressure of the society has created chaos in her life and she then forces Sami Khan to get married to her friend Farwah – a character played exceedingly well by Sumbul Iqbal Khan. This decision of Sara’s misfires on her as she did not think Farwah would scheme against her, alas that’s just what happened and Farwah managed to turn the entire household against Sara in no time, well except for Fawad who knows Sara is a gem and can do no wrong.

The Love Triangle Between Farwah, Sara and Fawad is Intense!

As the episodes roll by, we find out Farwah is pregnant with Fawad’s child and Sara has begun to be side-lined by not only her mother in law but to some extent her husband too. Even though he promises to be there for her all the time, his ‘Amma Jaan’ forces him to give more time and care to his new wife since she is the one giving him an off-spring and not Sara. Farwah has been plotting her evil tactics since the first day she set foot in Sara’s house, little did Sara know she was not bringing in a friend but her worst nightmare.

Is Saud the Only One Who Can See Past Farwah’s Sugar Coated Sweetness?

The latest entrant in the drama, Hamza Sohail’s Saud is the most straight-forward character in the drama and just the person Sara needs on her side. Even though he is Fawad’s younger brother he has proven to be much smarter than him in being able to judge what Farwah is playing at. We are yet to see whether Farwah can poison his mind against Sara or will he see through her diabolical tactics.

We’re loving Sami Khan’s Chemistry with Both the Leading Ladies!

Is there any role that Sami Khan can’t ace? Playing the ideal husband in Mein Hari Piya, Sami Khan proves his mettle once again, torn between two women he is trying his best to do justice to them both while at the same time taking his mother’s wishes into account too. He plays the best husband and son role perfectly. Sami Khan and Hira Mani have been seen opposite each other for the first time and we have to admit, they share a great rapport on screen together. On the other hand this is not the first time Sumbul and Sami Khan are sharing the screen and we’re absolutely loving the two together in Mein Hari Piya. Sumbul Iqbal has effortlessly essayed the role of the evil Farwah and is a much more toxic character than Maira Khan’s ‘Maria’ who is seen plotting and scheming her way with everyone including her brother’s, the only difference between the two negative characters is that Maria does everything openly while Farwah is sweet on the outside and a devious devil on the inside.

What’s Next for Sara and Fawad?

Since the past few episodes we have seen Sara and her sister consulting a gynaecologist in order to help treat Sara’s condition. Will she be able to conceive after all these years and turning the tables around on Farwah? Watch Mein Hari Piya to find out how the story unfolds further.

A Cheekh Resonating With an Epic Face Off : Cheekh Episode...