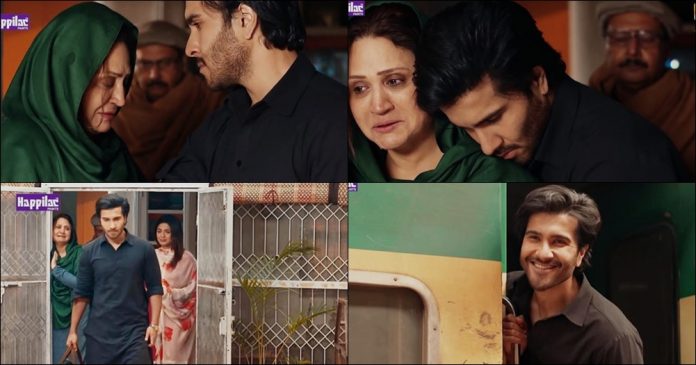 It can be said without a speck of doubt, that the enigmatic duo of Abdullah Kadwani and Asad Qureshi have truly produced an iconic, blockbuster drama. As a matter of fact, this 7th Sky Entertainment production is all that the Pakistan’s entertainment fan-base can talk about! And the latest episode, Episode 5, has left the viewers feeling a massive mix of emotions.

Was it just us who felt the pain and foreshadowing in this episode?

Let’s take a look into what felt like one of the biggest turning point in the drama so far.

If you did not feel the agony in this scene, you better get your serotonin levels checked, because we just couldn’t let go of our tissue boxes.

As Farhad wished his mother, father, sister and friends goodbye, we couldn’t help but think, is this his final goodbye to them? Or will he return? If he does return, will he ever be the same Feedi?

Was this impactful scene, a tool used by the producers to mark a turning point in the life of Farhad, and in the drama as a whole?

The smile on Feedi’s face, that reaches his eyes, the hope in him, the encouragement to win the subject of his love, will the light that shines from within him remain the same?

Or will Bahawalpur, the city in which his love resides, bring him nothing more than pain and obstacles?

If this wasn’t enough proof that this is a major turning point in the drama, Feroze Khan’s Instagram post just confirmed it too!

The heart-throb Khuda Aur Mohabbat star, himself, particularly posted this picture with the caption “Feedi is now in Bahawalpur”.

While the audience is excited about the reunion of Farhad and Mahi, the anticipation has a ting of anxiousness too, to know how the life of a light-hearted and genuine human being like Farhad will turn out to be after he takes on a new journey in pursuit of love.

If you haven’t watched this emotionally-wrecking, roller-coaster episode yet, what are you waiting for? https://youtu.be/JsrKM8kaARc

We can’t wait to watch what happens next! Take a sneak peak from the promo of Khuda Aur Mohabbat’s upcoming episode! https://youtu.be/HwhoxSGnAZk

Take a look at Feroze Khan’s post about the massive turning point in the drama https://www.instagram.com/p/CMg2fCfBH1D/?igshid=1867laetgzi5p.

Cheekh – Episode 15: Wajih Doesn’t Seem to be Backing Down