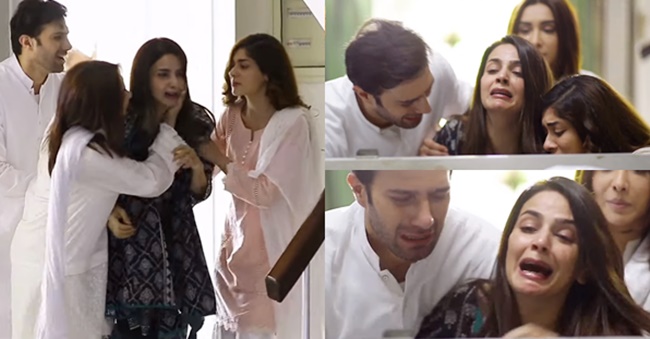 Cheekh is a Big Bang Entertainment project produced by Fahad Mustafa and Dr. Ali Kazmi. The story revolves around a woman fighting against injustice and the murder of her best friend, despite the fact that her own brother in law is the culprit. Starring Saba Qamar as Mannat and Bilal Abbas Khan as Wajih in lead roles, Cheekh has won hearts all over, while Emaad Irfani in the role of Shayaan is also bagging a lot of love from the masses.

Episode 24 is by far the most emotional episode of Cheekh.

We were already sad when Mannat was thrown into mental asylum after her mother’s testimony, proving her to be mentally unstable, but this episode brought about a huge wave of emotions that we were definitely not prepared for.

First things first, Wajih is still the same carelessly wild man, as he visits Mannat in the asylum just to provoke her. She stays strong and asks him to leave immediately, not making much of anything he says.

Later on in the episode, Haya, Ramzan Chacha and Wajih’s friend release Mannat from the asylum and we all take a breath of happiness believing that she is now out. But our happiness is short-lived as Mannat walks into a house of mourning. She has been released from asylum temporarily to attend the funeral ceremony of her mother who has tragically passed away.

Yes people, to our immense surprise, Mannat’s mother dies in this episode and Saba Qamar completely leaves us in real grief after this scene. She is fabulous with her acting and shows her innate versatility in this episode. From walking through the gates to when she catches sight of her mother’s body, her acting skills show what a true gem she is.

Shayaan is still taking our hearts away for being the most caring and supporting husband.

When Mannat is taken back into the asylum, we see Shayaan in a state of heartbreak that can only be seen through his acting. He is sad and broken, but tries to act strong for Mannat.

Another great scene from the episode is when Shayaan stays by Mannat’s side, even in the asylum. The way they both hold hands through the bars, while Mannat is locked behind them, simply melts our hearts. He is such an amazing character and Emmad Irfani fits into the character as if it was tailor made for him.

Yawar is slowly breaking down as he is left alone to handle everything.

Wajih’s arrogance and Shehwar’s memories are breaking down Yawar to the point where his life has come to a halt. He is usually seen sitting in a dark room lost in contemplation.

Amidst a whole lot of chaos and tragedy, Cheekh really has left us all in a flurry of emotions and tears. Looking forward to what the next episode will unveil.