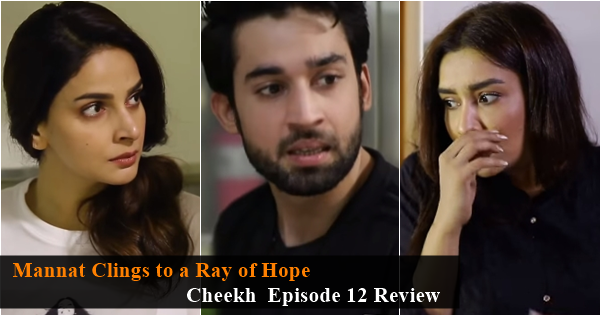 What a startling episode of Cheekh; so intense and full of emotions! The whole episode revolved around a man who was hopelessly pushed into a terrible dilemma of choosing between his siblings and a wife that he loves. The whole idea was penned down so realistically, that it was highly convincing for the audience. Showcasing a common life phenomenon, Cheekh has moved on with its lifelike story, keeping the scenario quite interesting.

Shayan, who loved his wife, despite her obsession with Nayab’s murder, came back home and was fed off despicable lies about Mannat. It was rather predictable that he would get confused. Shayan could see Mannat putting her marriage at stake for the sake of bringing justice to Nayab. He realized that Mannat could go beyond his expectations to raise her voice against brutality; however, it is lucky for Mannat that her husband has this deep love for her, as there is a chance that she wins his trust and defies the lies with proof.

Saba Qamar and Bilal Abbas Khan are nailing their respective roles in the show! The pressure created between these two characters can be felt so deeply, that more often than not, it can be forgotten that it’s scripted. Saba Qamar’s challenging smirk holds the quality to kill someone on the spot. Bilal Abbas Khan on the other hand, is perfectly doing justice to Wajih’s character and is getting all the praises, even with a negative role.

Finally, it was a turn over to see Shehwar slowly moving into the situation. Yawar, with his hypocritical nature, never shared his family’s secrets with her, which had confused Shehwar and she was finally silenced by him, upon asking too many questions. She recognized her lack of freedom to think or ask questions, and tended to go with the flow.

Shayan’s behavior towards Mannat at the beginning of the episode was heartbreaking, but after watching her genuine expressions, Shayan took less time to realize what Mannat was really going through. The blindfold around Haya’s eyes, kept her from admitting what Wajih was capable of. She wanted Mannat to leave the house and Wajih tried to play another blame game, taking advantage of his sister’s heart strings, to spoil Mannat’s image. Despite of all the junk dumped in Mannat’s court, Shayan started trusting his wife and took a stand for her, which was really comforting to see.

Another exciting progress was revealed! During a threat & tease encounter between Wajih and Mannat, Shehwar heard Wajih’s confessions that shocked her to the core. Here’s hoping it ends up adding another witness to Wajih’s crime, otherwise she will easily be forced to zip her lips by her dominant husband, Yawar. We are curious to see if she has the courage to raise a ‘Cheekh’ against wrong.

Overall it was a fantastic episode with intensely dramatic moments. It is wonderful, how Cheekh is written and executed so realistically. The acting and the dialogue delivery seems to be coming from within, which is why Cheekh is successfully resonating in the minds of its fans. Cheekh’s team truly deserves a bow for this stunning success.

Bilal Abbas Rules over Twitter after His Powerful Performance in Dunk

The Reveal of the Ramzan OST has brought about an Onset...