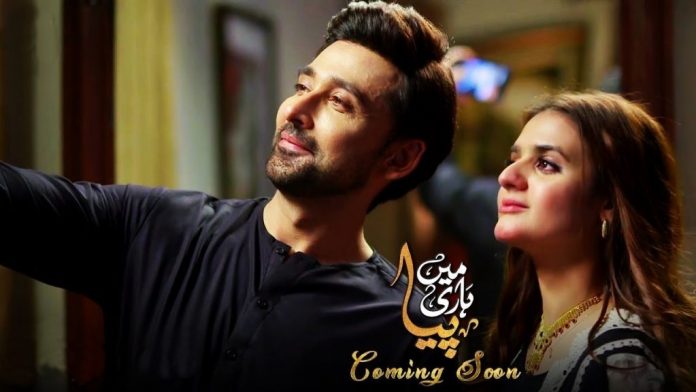 ARY’s latest upcoming drama Main Hari Piya has created quite the buzz over social media. Starring an unconventional cast of Hira Mani, Sami Khan and Sumbul Iqbal Khan, the show promises to have the audiences hooked to its dramatic yet emotional plot. While we have seen the magic Sami Khan and Sumbul Iqbal create together on screen in dramas like Dulhan, this is the first time the lover-boy Sami Khan will be romancing the gorgeous Hira Mani on-screen!

The teasers have given us a gist as to what Main Hari Piya is all about, the first promo shows a very happy couple, head over heels in love, Sami Khan plays Fawad while Hira Mani plays his loving wife Farwa, the only thing missing in their lives is their bundle of joy. Keeping in mind the general mentality of our society, this issue is bound to cause some serious chaos in their lives. It seems like Hira Mani will be playing the dutiful ‘goody-two shoes’ character once again as she can be seen convincing Sami Khan (her husband) to get married to her friend in order to have a child of his own.

Hira will be seen giving the ultimate sacrifice a wife is forced to give in such dire circumstances. Sami Khan essays the loving and caring husband who is being forced to marry someone else for the sake of having a child, we wonder if he will end up falling in love with his second wife as much as he feels adamant not to do so as seen in the teasers. Will allowing her husband to marry another woman be Hira Mani aka Farwah’s biggest mistake ever? We will have to wait and see how the story unfolds once the drama hits our tv screens.

We also spotted verteran actor Marina Khan who will be playing the role of Sami Khan’s mother in the show, will she be seen in a positive or negative role is what we are anxious to see.

The drama is produced under the banner of Big Bang Entertainment, directed by Badar Mehmood who has blockbuster dramas including Ishqiya, Cheenkh and Dunk under his belt. Keeping in mind the kind of dramas Badar Mehmood directs, we are sure Main Hari Piya will have the same interesting and engaging storyline like his previous work. The show is penned down by Qaisra Hayat and will be aired on ARY Digital.