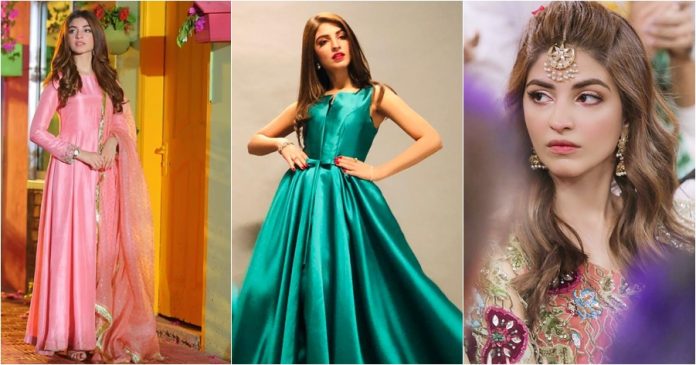 Impressed with her acting skills in previous plays, fans are now super excited to watch her in a new avatar in Uraan and see what she would add to their screens this time. Alongside the charming Kinza, Uraan will also star another young actor Adeel Chaudhry and veterans Aijaz Aslam, Zainab Qayyum, Rubina Ashraf, and Nida Mumtaz in significant roles. The star-studded drama production of 7th Sky Entertainment is helmed by Shakeel Shaiq and will soon be broadcast on Geo Entertainment.

Kinza Hashmi has always managed to steal the show in whatever play she appears in, and it looks like Uraan won’t be any different. We have previously seen her prove her acting chops in dramas, including dramas like Seerat, Ishq Tamasha, Deewar e Shab and Gul o Gulzar. With Uraan, not much has been revealed about the drama yet, but from her social media posts, the star has revealed something about her character dressed in the gorgeous saari looking absolutely beautiful. It seems like she will be playing ‘Malika’ in the play – and we are eager to see what kind of role she would be playing this time around!

From all her past performances, we have seen how her palette brags distinct hues; give her any role, and she will perform it with the required enthusiasm and commitment. With the gorgeous actress now playing the lead in this new drama, alongside an ensemble cast and a reputed director, we are eagerly looking forward to Uraan and just can’t wait for the play to go on air. If you are looking forward to enjoying some new dramas, you should definitely add ‘Uraan’ to your list because the anticipation around Kinza Hashmi has been building higher and higher each passing day!