Sadia Jabbar Productions is quite well known for their serials that are always true to real life stories, highlighting the prevalent issues in our society. The production team brings forth substantial content with important life lessons throughout, and their current smash hit Khafa Khafa Zindagi is no different. While every other drama talks about how the women are deprived in our society, this drama highlights the struggles of a man in the journey of his life, and how he manages to bring everything together. The society considers females to be compromising while the men are considered to be atrocious and cruel. Khafa Khafa Zindagi depicts the other side of the story accentuating men as equally compromising and caring in a marriage.

The drama leaves behind stereotypical love stories where couples are happily married and drowned in love. It highlights a serious, sensitive and somewhat common issue of our society: Divorce. Khafa Khafa Zindagi is about the psychological impacts of divorce on both the spouses and the kids. It also encompasses the emotional dilemma the kids have to face when their parents part their ways. Subsequently, the drama reflects an alternate way of pursuing divorce, which gives the couple a chance to reconcile before the ultimate separation. It completely sustains the dedication and hard work put into it by Sadia Jabbar and her team.The VJ turned actor Ali Safina (Bilal) is absolutely convincing in the lead role, with Sumbul Iqbal (Sara) doing equal justice to her part. Their marriage is knit with love, which turns into a disaster when Bilal loses his job and Sara finds it difficult to make ends meet without a persistent income. While the story highlights Bilal as the struggling father and husband, it also portrays Sumbul as a strong woman who fights for what she wants. The plot also unravels an important life message for the families of the spouses, as Sara and Bilal´s marriage gets destroyed at the hands of their mothers, who constantly interfere in their lives and try to influence their decisions. The emotional turmoil that their kids have to go through is absolutely heartbreaking.Failed marriages are becoming the norm of our society, with majority of the marriages been broken for petty issues. The plot is completely relatable to most of the viewers´ life, which is the biggest reason why people are loving it so much. The first episode of the drama received 195k views in just a few hours, with lots of appreciation from the viewers. 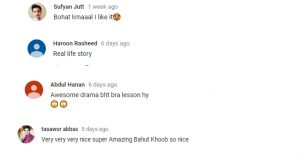 People are totally falling for it and cannot stop appreciating the fact that the drama has a big lesson for all the married couples and their families. The intense emotions of the drama keep the viewers on their toes while they bite their nails off in apprehension.

With only 8 episodes aired as of now, the story is yet to bring some exciting twists. And as excited as we areto know what the upcoming episodes will reveal, we wish to see the couple together again. Let us now take a moment to express gratitude to Sadia Jabbar Productions and their outstanding production crew for giving us extra ordinary life lessons and relationship goals through Khafa Khafa Zindagi.

Neelam Muneer, Yasir Nawaz and Wahaj Ali will Appear Together in...