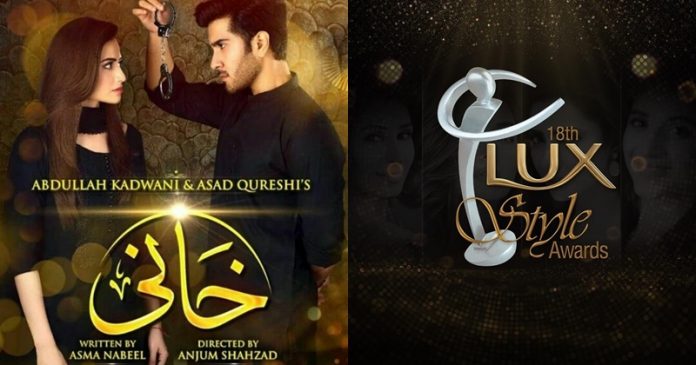 Every day, we see countless dramas on numerous channels. However, not all of them are appreciated and praised equally. Among hundreds of dramas, only eight to ten are able to make their mark which are further reduced in number when considered for award nominations. Similarly, Lux Style Awards has nominated the top five dramas of this year. While Aisi Hai Tanhai explored the negative side of social media, Dar Si Jati Hai Sila was based on sexual abuse. On the other hand, Suno Chanda was the ultimate comedy drama of the year, Dil Mom Ka Diya revolved around family issues. Last but not the least, Khaani was centred on a troubled love story with a strong female protagonist. Although all of these dramas are well-deserved, only one of them will be triumphed and we have a favourite too.

Directed by Anjum Shahzad and written by Asma Nabeel, Khaani became one of the most-watched dramas, broke multiple records and created history. The last episode saw the highest ratings in television history. But what makes it so special and why does it deserve to win Lux Style Awards? The brilliant portrayal of Khaani by Sana Javed is not only an inspirational character but her bravery and refusal to bow down in front of injustice has not been seen on television before. Sana Javed gives her career-best performance and proof of which is evident in the scene where Hadi forcefully gets the court papers signed by Khaani’s father. The way Sana Javed expresses her anger and grief simultaneously is not an easy feat.

Similarly, Mir Hadi, played by Feroze Khan, goes through a drastic transformation which is so beautifully conveyed that the viewers went from hating Mir Hadi with a passion to praying for his survival in the court case. The credit goes to Feroze Khan for transforming his character from a spoiled, malicious murderer to a spiritual and grounded man. On top of that, Asma Nabeel’s exceptional writing with incredible dialogues makes Khaani the deserving candidate for Lux Style Awards 2019.

It is not every day that we come across a story like Khaani which focuses on raw emotions of human beings and does not concentrate on the typical protagonist/antagonist formula. That is the reason why we think Khaani should be the winner of this year’s Lux Style Awards. We wish all the best to all the contestants and may the best win!