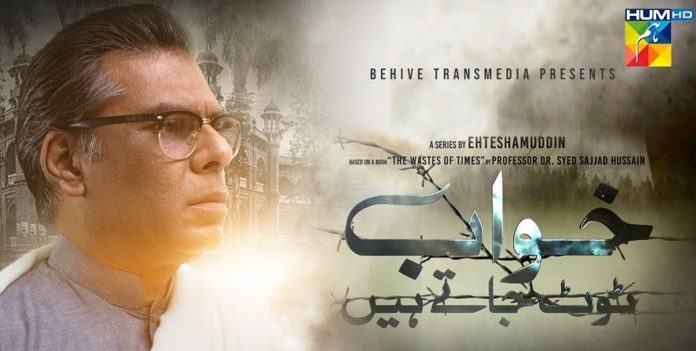 The first few minutes of ‘Khaab Toot Jatay Hain’ come with a sense of grim foreboding. It’s the year 1973 and Professor Dr. Syed Sajjad Hussain (former VC) is penning down his memoirs in Dhakka Central Jail. He was convicted for not showing support to Sheikh Mujeeb-ur-Rehman during the campaign against Pakistan.

Sajjad Sahab, a man of dignity and former VC at Dhakka University was put into jail but was clueless about what his crime was. The secret was revealed when a duty officer shifted him to prison cell #2 and called him a traitor. That hit him like a hard rock and his head fell out of surprise and grief.

If you have been following this drama serial with a curious mind, you would find moments of chills, shock, and sadness in the new episode. Anyone who is well-read about the history of the separation of East Pakistan and West Pakistan can sense how tricky it is to transpose from book to screen, especially with a different historical narrative.

Bilal Ashraf and Ehteshamuddin have taken on the precipitous challenge but for all the action additions in Sajjad Hussain’s memoirs. The set is dark and angeled to look like a film; wisely, it feels a little too horrific. The production amps up the thrill and suspense inflections that the drama combined so brilliantly with family bonds, political chaos in the country, and charges of betrayal that the civil unrest triggers.

Probably it is because of the compelling questions around political narrative, civil disobedience, and the role of the neighboring country, the drama took an intense turn and got the audience glued to their screens for more than half an hour. The cinematography and dialogue exchange in this episode is simply terrific, you would get chills and goosebumps on witnessing the scenes of public revolt and bloodshed against non-Bengalis.

The script is gripping and stays on the original historical account. There are several watchable scenes in the drama featuring powerful conversations between Professor Sajjad and Chief Sahab (Mohammed Ahmed). Another scene features a brief talk between Professor and his wife, who is not satisfied with the Army operation in the Dhaka University campus. She tells Sajjad Sahab that the people are labeling him a traitor for not supporting the Mujeeb government.

Kudos to Fawad Khan and Wife, Sadaf on their 13th Anniversary!