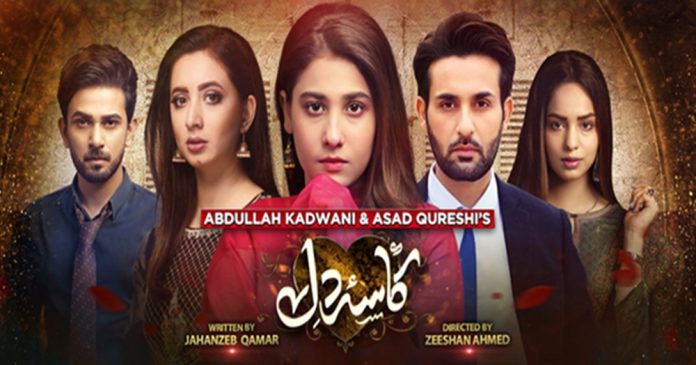 7th Sky Entertainment’s latest drama serial ‘Kasa-e-Dil’ has only recently began, but already has us hooked. Produced by Abdullah Kadwani and Asad Qureshi, the refreshing new story centers around Hatim, and Somiya, two cousins who like each other and are waiting to be united but as per the latest developments in the story, their dreams are shattered.

Though, not everyone is sad about it. If you could define Raheela’s (their cousin) feelings in one word, it would be schadenfreude. She is rejoicing the pain of the man who rejected her love. It doesn’t matter to her how much agony Hatim and Somiya are going through, this is a moment of fulfillment for her. She perhaps feels understood now.

The hurt is real for all three people. For Hatim and Somiya, this has been their dream, for a long time. Now it is shattering in front of their eyes. It’s all in their own hands. Yet they are unable to do anything to stop this impending avalanche of unsurmountable grief. What can they do after all? Disregard everyone else, and just be selfish? That is not how they were brought up. Despite her shenanigans, Somia has the attitude of an ache beti. Hatim is no maverick either. Their relationship is perhaps just isn’t strong enough at least yet. The scheming of Hatim’s mother and the hateful bile of Raheela is proving to be too much of a hurdle to overcome. To add intrigue is this the admirer of Somiya, Aden. With her and Hatim moving apart, and Aden gaining courage slowly, things seem to be moving towards a classic love triangle.

This 7th Sky Entertainment Production has certainly caught the attention of the public. One of the primary reasons is the wonderful and nuanced acting of the lead pair. Both Hina Altaf and Ali Ansari have been able to create a connect with the audiences. Especially, the transition of Somia has been depicted beautifully by Hina Altaf.

Things are likely to be complicated further as the story progresses. We expect the different characters to be entangled even further, causing each other more pain and suffering. So far, the drama has moved at a rapid pace and show cased the complications and contradictions of each character. Well, it looks like this is set to continue for a while, before everything comes crashing down.

Muqaddar follows a unique tale of the struggle and survival of...

Marriage based on love-not intended to break any stereotypes! Taimoor aka...