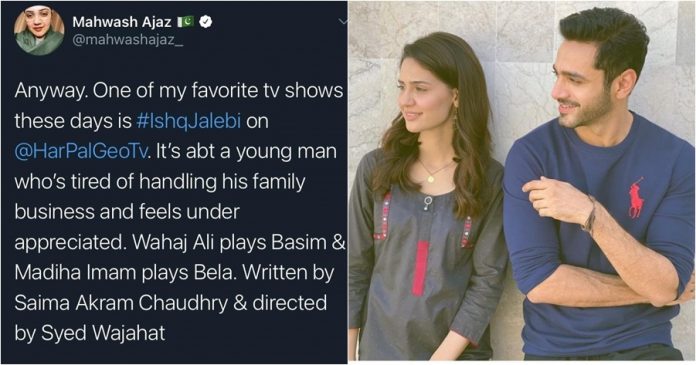 7th Sky Entertainment’s Ishq Jalebi seems to have become the viewers new hot, favourite drama serial. Written by the ‘Suno Chanda’ famed Saima Akram Chaudhary, and directed by the powerhouse duo of Abdullah Kadwani and Asad Qureshi, this lighthearted drama serial is based on family dynamics and love.

The drama has caused an absolute frenzy on the internet and it is all anyone can talk about!

Whether it’s the OST or the drama itself, it is absolutely adored by the public!

It also happens to be one of the most well-liked preferences of the audience this Ramadan, among other serials.

And don’t even get us started on the love garnered by the duo of Madiha Imam and Wahaj Ali playing the lead couple of Bela and Basim!

The audience is also able to connect with Bela, and feel the love she feels for Basim.

The highly anticipated parts of the drama are when Bela and Basim’s weddings are to be discussed, and the viewers just can’t wait to see how they both react!

Other characters in the drama including Irsa Ghazal, Noor ul Hassan and Qavi Khan, have also garnered a great amount of applause by the audience, for their impeccable acting skills. This clearly shows that every aspect of the drama is adored by them. They also go on to praise Saima Akram Chaudhary for her exceptional scriptwriting skills!

Ishq Jalebi has really touched the hearts of it’s viewers with it’s lighthearted and humourous nature. The serial’s fan following just can not wait to see what happens next!

If you haven’t watched the latest episode of this exhilarating roller-coaster ride drama, what are you waiting for? https://youtu.be/9OX6fLLmfv0