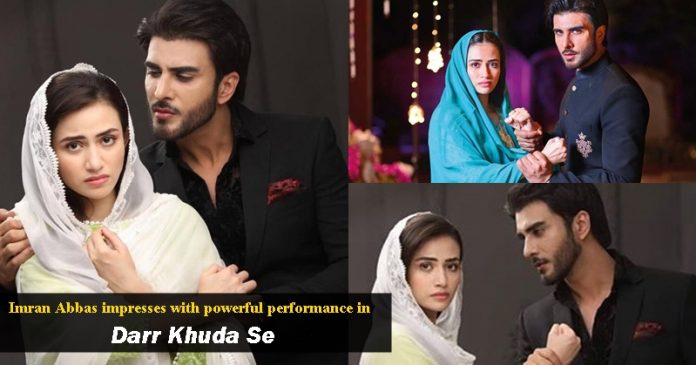 7th Sky Entertainment has given us many hit serials, and Darr Khuda Se is another addition to their list of must-watch dramas. Written by Sarwat Nazeer and directed by Anjum Shehzad, the central theme of the drama is to highlight workplace sexual harassment and how it impacts on the life of a woman and those around her. Starring heartthrob Imran Abbas and the beautiful Sana Javed in the lead roles, the drama makers have so far done a wonderful job in portraying this important social issue prevalent in our society.

Afreen, played by Sana Javed, is the protagonist, who belongs to a middle class family and has to step out of her house to support her family. She works under Shahwaiz, played by Imran Abbas, who is a womanizer and married to an elderly woman, but has eyes on every woman he sees around him. Afreen is one of his victims and he tries everything to harass her, making it hard for her to do her job. Imran Abbas has outdone himself as Shahwaiz and his portrayal of a harasser is totally convincing and realistic.

Imran Abbas usually plays good-boy roles or that of a romantic and charming hero, but in Darr Khuda Se, we see him in a completely different avatar. He essays the role of an extremely negative, evil, and selfish man who draws pleasure by flirting with women and conveys excellently all the negative thoughts and wrong intentions running through his mind. His conniving facial expressions and body language depict the antagonistic energy required for Shahwaiz’s character and makes you hate Shahwaiz, which means he is doing his job well. The manner in which he has stepped completely out of his comfort zone is appreciable and gives us another reason apart from the thrilling story dynamics to tune in to this drama every Tuesday at 8.00 PM on Geo TV.

Looking forward to what Shahwaiz has in store for us and how Afreen tackles his growing interest in her and all the problems he creates in her life.