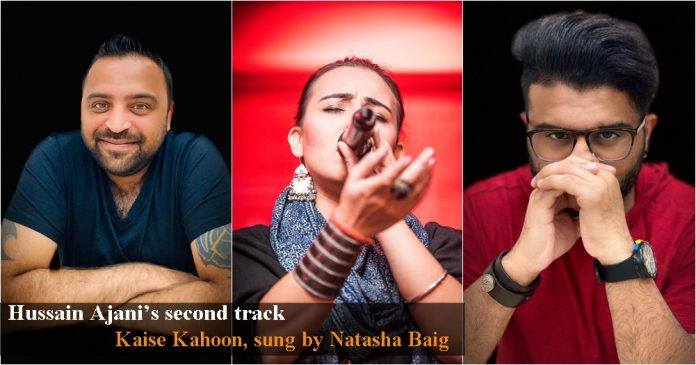 Dallas based producer Hussain Ajani is releasing his second track titled Kaise Kahoon sung by Natasha Baig on his YouTube channel, while the first track he released last month was titled Jugni and was sung by Jabar Abbas, Jugni has received a lot of appreciation so much so that even though it was just the first track to release on his YouTube channel even then it crossed 200 thousand views in 2 days.

Natasha Baig, who is known make some soulful tracks with movies songs like Jhoom Le and Ishq Lara under her belt, and an independent track titled Mushkil Kusha with Dallas based music composer Ayaz Ismail on the occasion of Eid, the song was widely appreciated across the world, while speaking to Natasha she tells us about this Kaise Kahoon “Well first of all thank you for acknowledging my work. This track is about one-sided love and the process that a person goes through in that phase. The special thing about this song is that I sang modern Ghazal for the first time and the way it is produced is phenomenal.

This is the beauty of collaborations because one gets to see different horizons.” we asked her that since this is her second collaboration with Ayaz and Mushkil Kusha was widely appreciated by the audience what do you have to say about this track and his work? to which she replies “I am glad that I got connected to Ayaz Ismail because I became a fan of his work. Even with Mushkil Kusha, I felt like as if I was doing something unique from my usual style which was fun. I am glad Mushkil Kusha got its recognition. Ayaz Ismail’s work of style is intriguing because He is doing something that I am not and I would say you won’t see such type of work here in Pakistan so that zone caught my attention and that is why I enjoy collaborating with him. This song will hit my fans in a good way because they haven’t experienced something like this before from me.” We asked her that this is was her first collaboration with Hussain Ajani, what do you have to say about him? to which she replied “Yes it’s my first collaboration with Mr Hussain Ajani and I have to say that He is the most chill and professional person to work with. He is to the point and I love that about him. This collab went so smooth and I think that is because of his professionalism. I am happy to be a part of his label.”

As luck would have it this track is mixed by Ayaz Ismail as well, this is what he had to say about his experience on working the series, he says “It’s been a pleasure working with Hussain Ajani. This project has been special so far, and exploring different genres of music is even more intriguing. The first song ‘Jugni’ did well sung by Jabar Abbas, and now I am looking forward to this next one sung by Natasha Baig. Natasha is fantastic, and working with her once again has been special. The texture of her voice is very mystical and the composition by Quaid Ahmed is just magical. It’s been a pleasure working with Hussain Ajani & Natasha Baig. Looking forward to many more.”