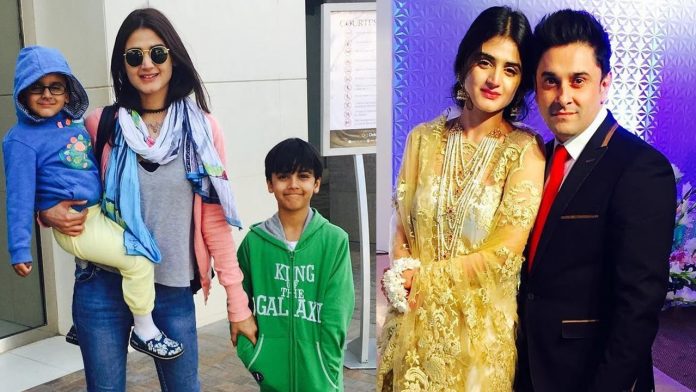 A few days back, we saw Hira Mani; an acclaimed actress and wife to a famous actor as well as television host, Mani aka Salman Sheikh; on the set of “Speak your heart with Samina Pirzada”, and oh boy!That was one interesting show!

The show; hosted by the extremely talented actress, Samina Peerzada, is Pakistan’s first ever digital show, meant to tell untold stories of the heart throbs of the country. And well, Hira Mani shocked us with the confessions she had to make! 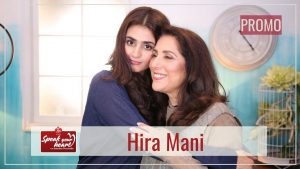 Did you know, Hira Mani just confessed to cheating on her best friend as well as her fiance’, in order to achieve her dream of marrying Mani? Surprising isn’t it! Upon Samina Pirzada’s questions about how she came to meet and know Mani before her marriage, Hira Mani revealed that she took Mani’s number from the phone of her friend, who was dating Mani at that time, and later she would chat with Mani for hours on phone. So she was simultaneously making a fool of her family who thought she was talking to her fiance, her fiance who thought she was busy and her friend who didn’t even know her own friend betrayed her! 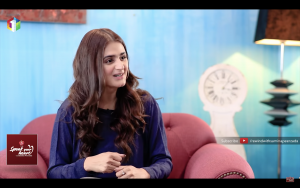 While talking about Mani, Hira just could stop telling us about this fairy tale image of Mani, how he is the perfect sort of guy who made the famous “Hira Mani” out of an ordinary girl.

“I don’t have words to describe Mani; There is no insecurity in him; there is no jealousy in him; There are no ego-related problems with him, nor does he think that he is older or a guy so he is better off; he changed me completely you know”

One could’ve been tempted to believe the image she created of Mani, in fact we almost did! Unless Mani made the very stupid mistake of poking at the #MeToo movement in his very controversial post on Twitter. 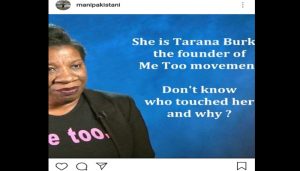 The post was later removed by Mani, which looked like an attempt at making amends. However, people were quick to react and his post got viral in no time. Ahad Raza Mir might have taken a deep sigh of relief, for the nation found someone else to bash, finally!

Pakistani actor Salman Saqib Sheikh, better known to us all as Mani, posted this on Instagram to mock the #MeToo movement.

Apparently it's not enough being a horrible actor. You have to be a worthless trash of a human being as well. pic.twitter.com/gK2Kk78SUr

Mani however claims that he never posted the article since he is not really active on social media. The post was made by his PR guy. 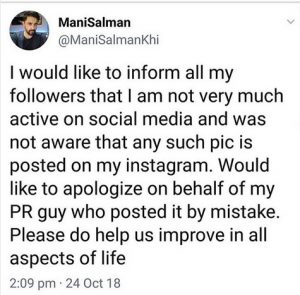 If that’s really the case, we believe its time you changed your PR guy cause the man is quite obviously doing not much to help you out on the matter! And we would suggest you to be a tad bit more careful in making jokes out of such serious issues! This nation doesn’t spare a transgressor! Just like Uncle Ben from Spider man said

Affan Waheed First time talks about his divorce in Rewind With...

Ghisi Piti Mohabbat and Ramsha Khan get the Twitterati’s Nod of...