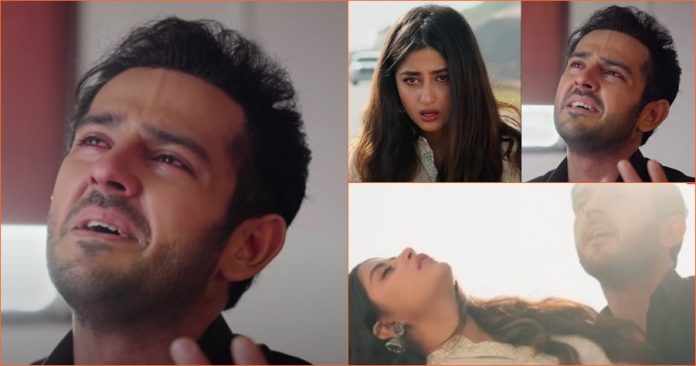 The latest episode of Ishq e Laa proved to be one that had everyone shocked with the untimely demise of Shanaya, and much like everyone else, it has opened up a box of questions for us as well – including those about how the drama will move ahead as well. Amidst such questions, one that stands out the most is what will happen now to Azlan?

Essayed by the multifaceted music composer turned actor, Azaan Sami Khan in his debut role that had been a long time coming and is appreciated massively by fans, Azlan has been the epitome of support throughout Ishq e Laa. The drama has focused on bringing the story of societal ills to the forefront, and has intertwined a narrative that brings different socioeconomic strata face-to-face, which we saw culminating into what it did over the previous episodes.

However, in all of this, someone who has stood out the most has been Azaan Sami Khan as Azlan – be it him being the vociferous support needed by Shanaya to being at her side whenever she needed assistance, he proved to be the ultimate supportive male lead the drama needed.

The actor behind the powerful and encouraging character who has stood his ground and proved his mettle against two major actors such as Yumna Zaidi and Sajal Aly also took to his social media recently, where he spoke about the character that was Shanaya and how it aided in the construction and growth of his character, Azlan.

“In a world rampant with violence against women and a justice system that is crippled to favour the powerful, Shanaya Ahmed was a figure that represented the countless lives that we as a nation and world have lost to injustice,” he posted. “She was a figure that idealistically believed their voice could dutifully fight for the right cause.”

However, after the fateful moments shown in the last episode where Shanaya is slain for being the voice against society’s evils against women and the ensuing violence we see in the country, just how and where will Azlan go from here?

Much like the real-life name behind the character, Azlan too we believe will be shown going on a journey towards perseverance and an aim to find out how he can bring justice to his world. The character has already been shown as one who is out for support of the right things in life, and naturally we believe Azlan will be shown as someone who will continue on the fight that Shanaya started against the ills of society.

The episode in question, also brought forward Azlan’s larger aim in the drama, which stems from Shanaya, but moves forward into making the former into a character that people will see the resilience of Shanaya in, alongside the intellect and support that made Azlan such a lovable and reliable character. We can bet this will be dawn of a new era for the hero, who has so much to prove now.

Ishq e Laa has given its fans tons to emote over in the past few weeks, due to which we are sure they will now bring the story to a point where we will see the path towards justice and what is right.  In this journey, not only do we see Azlan as the flagbearer of bringing eternal peace and righteousness to Shanaya but we also see Azaan Sami Khan as a brilliant new addition the acting realm with his ability to shine bright in spite of having major talent work alongside him in this show with an ensemble cast!

What will the upcoming episode bring and how will the show chart Azlan’s journey? We’ll be glued to the TV sets to find out!