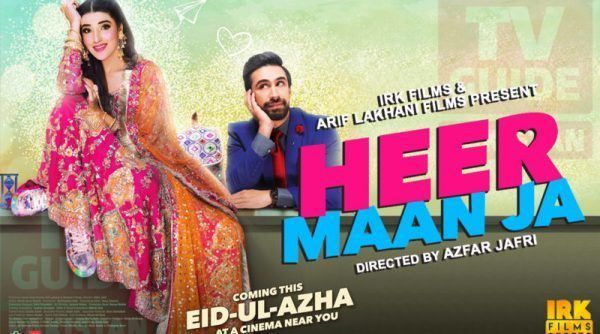 Heer Maan Ja has just hit the big screens recently and it’s already turning out to be a huge hit! The movie has been amassing praises and appreciation from all corners and is one of the few Pakistani flicks that the entire family can easily enjoy. It has been the perfect Eid release, since it’s a family movie devoid of any cheapness or vulgarity, be it in the songs, dialogues or even in the story. A complete family entertainer that amuses and delivers its promises, Heer Maan Ja’s release has taken the internet by a storm and the netizens cannot stop talking about it!

The hype for Heer Maan Ja is matching up to the excitement of people who have finally gotten to watch the film and are all praises for it. Here is what people are saying about the Film:

The on-screen couple of Ali Rehman Khan and Hareem Farooq was bound to make waves with this film, and we aren’t surprised that people have completely fallen in love with them! Hareem Farooq as Heer has stolen the show with her super cute expressions, dazzling looks and acting brilliance.

Not just the lead couple, but the villain of the movie, Faizan Sheikh as Wajdaan has apparently won hearts all over as well! Even with portraying a negative role, he has managed to garner huge admiration from the audience.

People have publically announced how Heer Maan Ja has been worth every rupee they have spent on watching it and that’s the best kind of praise the filmmakers can receive.

Even celebrities can’t stop showering praises for Heer Maan Ja’s team for putting up such a brilliant show. Uzair Jaswal, Abdullah Qureshi, Ahsan Khan, Adnan Siddiqui and many others are singing praises for the movie and its team, for an excellent job done!

In case you are still skeptical, whether to watch the film or not, we have got you covered! Grab your tickets now – trust us, you wouldn’t be disappointed!