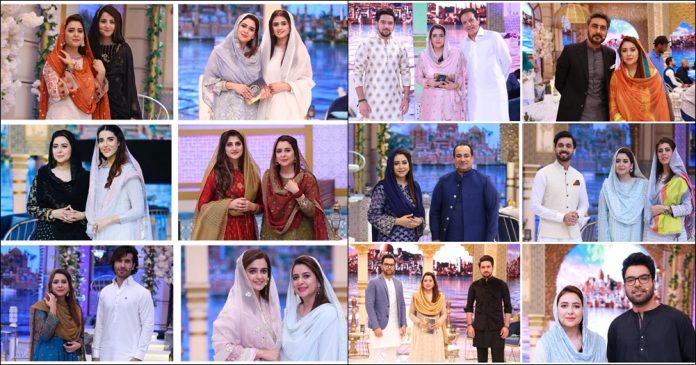 The theme of the show revolves around the very basic and important aspect of our lives that we usually don’t pay much attention to, i.e. ehsaas for others, which is as important as other deeds of Islam are. The show has been conveying optimum lessons successfully through informative segments and knowledgeable scholars; and it’s no wonder that it has gotten such a massive fan base.

Ehsaas Ramzan has been wonderfully hosted by Rabia Anum, who has actually been giving a tough competition to other Ramzan Tranmissions’ hosts. Her poise and the demeanor in which she conveys the message of empathy, generosity and respect cannot be overlooked.

The other person who has really gained massive appreciation is none other than Farhan Ali Waris. He is undoubtedly blessed with a soulful voice and his recitation has the capability to mesmerize the audience.

While Ehsaas Ramzan has glued the audience with numerous fun and inspiring segments, one of the key factors of the show has also been the wise choice of the celebrity guests by Geo Entertainment.

The charm of the show got doubled when legends like Bushra Ansari, Javed Sheikh, Adnan Siddiqui, Afzal Khan, Sahiba and Rahat Fateh Ali Khan shared their experiences, Ramzan routines and their own insight of ehsaas for others. Many young artists like Ramsha Khan, Madia Imam, Hareem Farooq, Muneeb Butt, Minal Khan have also captivated the viewers by their exciting discussions and antics with kids on the set of Ehsaas Ramzan.

The most popular segment so far is Makafaat, which has become a must watch series of telefilms, especially for guidance seekers. What goes around comes around is the concept behind it. “Jesi Karni Vesi Bharni”, “Takabbur”, “Qarz”, “Qeemat”, “Khidmat”, “Badniyyati” and many more of these short films carry a bunch of valuable life lessons which is creatively portrayed by the renowned producers Abdullah Kadwani and Asad Qureshi. The OST of the telefilm has been sung by none other than Sahir Ali Bagga.

All in all, Ehsaas Ramzan has given a whole lot of spectacular content for its viewers, with a noble purpose in mind.

Furqan Qureshi at top of his game in Bharas