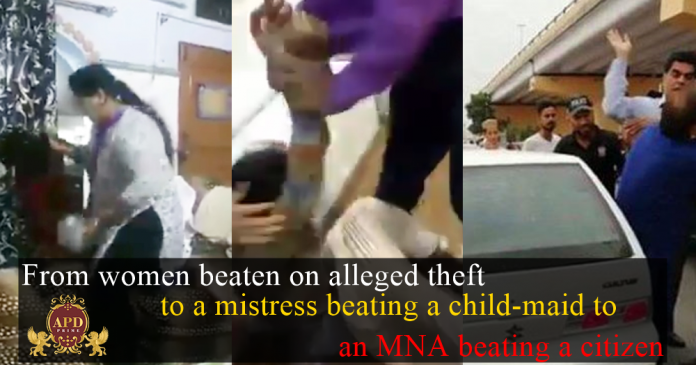 People who make such videos might not be stopping the culprit but they definitely put them on the stage for Social media thrashing. Social Media thrashing might be one of the brutal weapons but it can get someone real justice.

Just recently a video got viral in which a shopkeeper was openly slapping two women involved in stealing some clothes. On surface the act of beating did portray the women to be victims and it definitely is wrong to take the law in your hands without any investigation!

On the contrary, based on our experience with the law for past many years, we already know that small thefts often go unnoticed by officials-for they consider them to be small acts of crime and therefore don’t make their way to the files or grabs their attention, which ultimately makes citizen taking law in their hands.

For some, the video provoked some feminist and misogynist debates. Some thought it was equality to be treated the same way as men would be, and it might seem hypocritical to some people of women who want their doors not to be opened and their bills not to be paid out of any gentlemanliness to be saying that women are ‘nazuk’ and don’t deserve to be treated this way.

But one must realize that this culture respects women and this video has been taken so seriously that majority feels the treatment was wrong which brings some hope to us that it is not an entirely misogynist society as alleged by many liberals.

But the question is, had this been a man’s act in a woman’s shop, would we still be taking the same action? Are not men the subject of ridicule in this society and lack of empathy when it comes to physical torture?

It is not just a man or a woman , in fact, any human being or animal doesn’t deserve to be treated this way!

Similarly another video involving a mistress beating a child-maid has been making rounds. And we wonder if what’s wrong is the men, women or human beings in general?

Is this a ‘normal’ treatment of the weak people in society in general, taking out our frustrations on every small matter? Is the difference of gender or the matter of power that provokes anyone, be it a man or woman, shopkeeper or a mistress or an MNA to go to any lengths?

Why is there so much anger in us?

When do we plan to calm down?

Have anything to say? Share in the comments below!