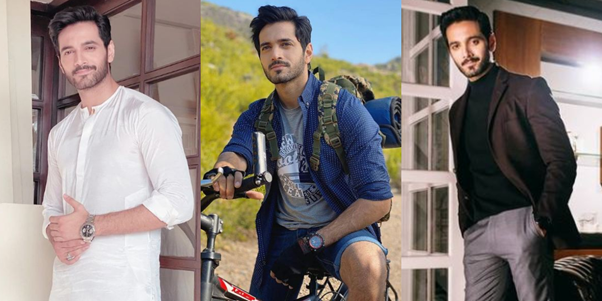 Wahaj is regarded as one of the most acclaimed performers due to his unwavering commitment to work. Few people get the chance to live their dreams, and acting was Wahaj’s ultimate reverie, which he is currently pursuing. This Lahore NCA graduate is a caring parent, an exceptional gardener, an attractive Model, and a natural actor – despite having no prior connection to the television industry.

Wahaj Ali’s growth as an actor is commendable, and with such charisma and acting prowess, he is well on his way to stardom. This soft-spoken and unconventional young artist has carved out a niche for himself via the variety of his work. He executes everything with the utmost intensity and candour that it deserves, whether it’s acting, dancing, or hosting. His efforts are reflected on screens.

His recent work in Dil Na Ummed toh nahi is a testament of his hard work and dedication that has made his fans swooned over him. Dil Na Umeed to Nahi is a socially relevant drama that addresses a variety of themes such as human trafficking and child abuse. Wahaj Ali is portraying the character of ‘Jamshed,’ a sensitive individual who ends up separating himself from the people he cares about the most, but despite his bleak surroundings he possesses optimism.

As the story progresses in the drama, Wahaj Ali’s performance as Jamshed in Dil Na Umeed toh Nahi has astounded us. It’s been difficult to witness the innocent Jamshed go through the trials he’s had to confront in the drama. Wahaj Ali has done complete justice to the character and the precision with which he depicts the character has been fascinating to behold; the way he transitioned from the innocent Jamshed to Jimmy left us in awe of his incredible talent; with each episode, Wahaj demonstrates his mettle once more!

Dil Na Umeed Toh Nahi is directed by Kashif NIsar and penned down by Amna Mufti’s latest alliance in collaboration with the Kashf Foundation; the series focuses on the hopes, dreams, and struggles of women who have been forcibly removed from their homes and stripped of their identities and agency.

The audience is surely loving the pace of the drama now, which is a welcome addition to the otherwise mundane plot lines, and it has proven to be well worth seeing. We look forward to upcoming episodes of Dil Na Umeed Toh Nahi and how Wahaj’s character will unfold. We wish Wahaj all the triumph in his life!

Fitrat in Review: Character Development is the story’s Biggest Strength