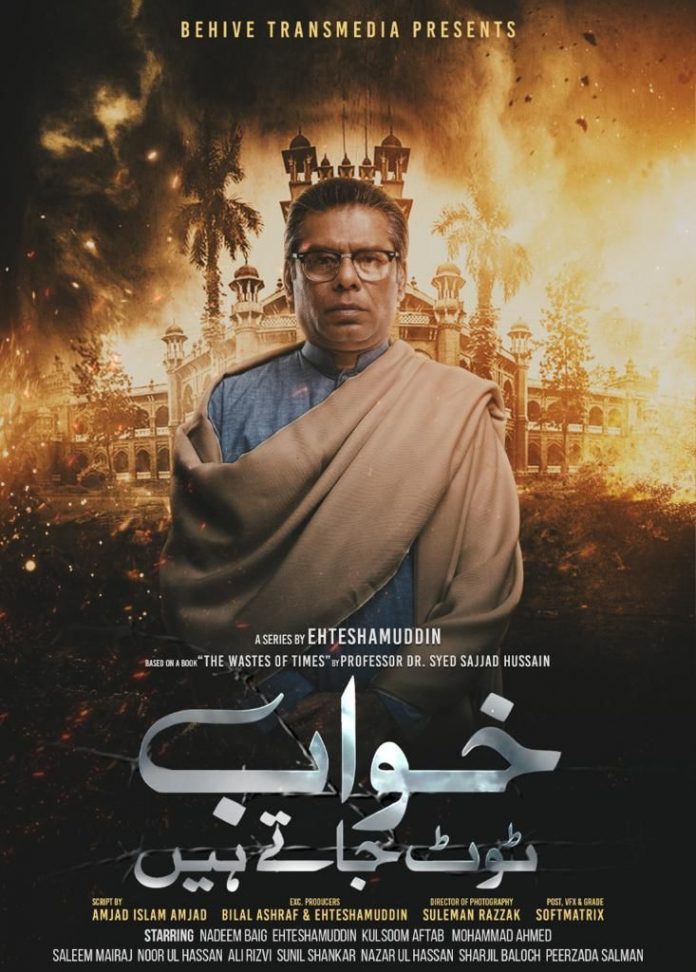 Hum TV’s mini-series “Khaab Toot Jatay Hain” looks back at the unfortunate events of the 1971 Fall of Decca – what and how it led to the separation of East Pakistan to Bangladesh.

There is pure joy in realizing that ‘Khaab Toot Jatay Hain’producers know at least half of their audience needs a break from old-school stereotypical storylines.

As the highly-anticipated mini-series on-aired on HUM TV at the prime time last night, the first episode got the audience thrilled with its excellent cinematography and impactful plot. If you have missed out on episode 1 of ‘Khaab Toot Jatay Hain’, here we’ve come up with 3 reasons why you should watch Pakistan’s first-ever enthralling mini-series on your TV screens every Wednesday:

Khaab Toot Jatay Hain is based on a history book, “Wastes of Time” written by Prof. Dr. Syed Sajjad Hussain, former VC of Dhaka University. This series revolves around Professor Sahab, brilliantly played by the veteran director Ehteshamuddin himself. He compiled in this book the sad, painful yet most historic facts and harsh realities about the decline and fall of East Pakistan and all that he witnessed as the Vice-Chancellor of Dhaka University.

Amjad Islam Amjad has spelled magic with his powerfully written script that has reflected in every scene from the first episode.

In the beginning, we watch Professor Sahab writing down his memoirs in a secluded space in Dhaka Central Jail where he was held as a collaborator for not supporting Shaikh Mujibur Rehman in his campaign against Pakistan. Followed by some light scenes featuring his small family comprising of two little beautiful girls and a loving wife, Professor Sajjad Hussain boldly shares the historic causes and reasons behind the ongoing struggle in East Pakistan.

It would not be an exaggeration to say that Khaab Toot Jatay Hain got us chills and thrills throughout the thirty-nine-minute show.

A historic show about the fall of Dhaka, Khaab Toot Jatay Hain brings together a star-studded cast including seasoned veteran actors Nadeem Baig, Ehteshamuddin, Noor-ul-Hassan, and Saleem Mairaj among others. The powerful storyline further gets a 5 star with highly accomplished actors pulling off a great show from the very first episode with their excellent Bengali dialect, strong expressions, and sublime performance.

The 10-episodes mini-series comprises war scenes of blood, sweat, and anger. From what we have grasped in episode 1, the movie-like intense cinematic portrayal of the 1971 events has made it even more intriguing to watch. The sense of anguish, hopelessness, and betrayal has been realistically cinematized giving unpredictable suspense, surprises, and bone-chilling moments throughout the show.

We are already looking forward to learning where this intriguing historic story moves in the upcoming episodes. However, this joint effort of actor Bilal Ashraf along with Ehteshamuddin under their baby venture Behive Transmedia is sure to impress the audience with a promising action-filled performance for all episodes to come.

Will Shayan And Mannat Be Able To Win The War Against...

Kasa-e-Dil Epiosde 9 Review: Rahila is successful in creating misunderstandings between...