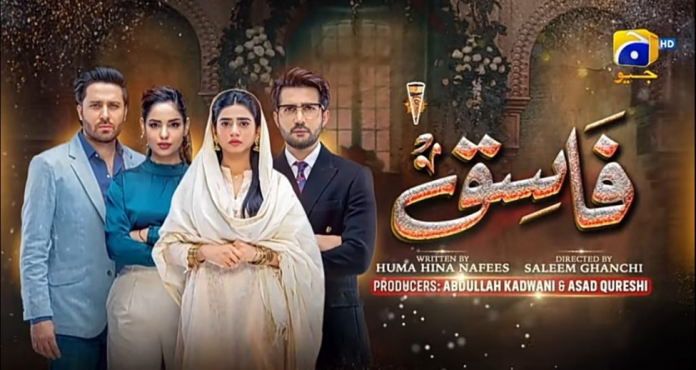 One of the most watched dramas of this year, ‘Fasiq’ ended last night with a happy ending for some and a remorseful end for others. The drama kept the audience intrigued and hooked to it with its compelling storyline and brilliant acting. After a riveting run of more than a 100 episodes and dominating the TRP ratings for the channel for the 9PM slot, the drama concluded on a high last night with a comprehensive last episode. The brilliant TRPs it got spoke volumes about its popularity amongst the viewers and how much the audience was invested in its story.

Penned down by Huma Hina Nafees and directed by Saleem Ghanchi, the drama starred Sehar Khan, Haroon Shahid, Sukaina Khan, and Adeel Chaudhry in the lead roles, while Mohsin Gilani, Beena Chaudhry, Hira Tareen, Azra Mohyeddin, and Sadaf Ashan also had pivotal roles to play in the serial. It is a presentation of the country’s leading production house 7th Sky Entertainment owned by the dynamic duo Abdullah Kadwani and Asad Qureshi.

The drama had a moral lesson for the viewers as they showed us how people suffer when they leave the path of righteousness and indulge in wrongdoings. The drama had a powerful and emotional ending and the last episode was a happening one showing that belief in Allah was more overpowering than all the evils around. It showed that what you sow is what you reap as Mutahir (Adeel Chaudhry) paid the price for whatever injustices he did to Fatima (Sehar Khan) and Savera (Hira Tareen) in his greed.

The story garnered a great public response as people fell in love with the story and the twists and turns it brought. Particularly, since the last couple of weeks, its episodes and teasers were seen trending among the top 3 trends on YouTube many a times.

The last episode also got more than 3 million views in just 12 hours of being uploaded on YouTube, and was trending on no. 3, which showed how much people loved the serial.

With some meaningful dialogues and power-packed performances throughout the serial, Fasiq will stay with us for long. Abdullah Kadwani and Asad Qureshi under the banner of 7th Sky Entertainment have produced numerous hit serials in the last few years and Fasiq extends their list of blockbuster serials. 7th Sky Entertainment has contributed substantially to the entertainment industry of Pakistan by bringing us dramas that not only get high ratings but also win the hearts of the audience, and Fasiq was no different.

In the end we can see that everyone eventually has to pay a price. Karma always comes into play. And this is what Fasiq has taught us in the last episode.

For those of you that have missed the last episode, here is the link ;

Shahrukh ki Saaliyan Episode 6 Review: The Truth is Out!