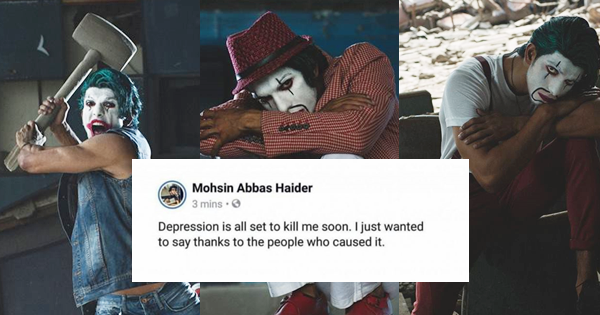 How many times, when we see Mohsin making jokes on his television show Muzakraat, do we think that this guy might be fighting a battle of his own? Not once in his entire acting in the movie “Na Maloof Afraad 2” which ironically comes under the comedy genre, did we feel that Mohsin might be emotionally unwell. 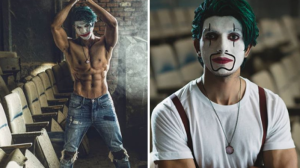 That, unfortunately, is the paradox of our entertainment industry these day whereby depression, the deadly disease is taking its toll on whoever it can locate as it’s next target.

Here we are, with another person on the verge of laying down his weapons and calling the fight off. Moshin Abbas Haider’s recent tweet was quite self explanatory:

The young lad who had secured his place in the industry via sheer talent and a large degree of hard work, lost his mother and her infant daughter in a short span of time. He probably never really recovered from the shock. However, his poetry suggests that there are people who have hurt him immensely. 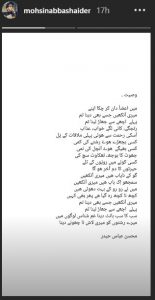 People from all over are responding to this alarming situation in various ways. Some of them are sending their love to the amazing actor and others pleasing him to stay strong. Some celebs even shared their own fight against depression to help Mohsin feel that he is not alone in this. 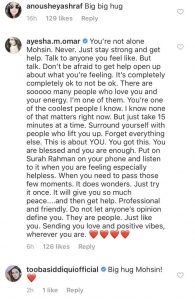 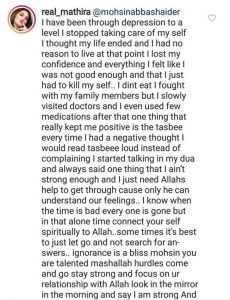 Countless lives have been surrendered to the disease in the past. How many more do we need to understand that it is real and we, who make the society, are the ones who are actually responsible for it! We, who make a show of extending our hands when we find someone in trouble are the ones who force people into this ditch in the first place.

Mohsin Abbas released a video statement and talks about his recent condition .

Mohsin Abbas, we re all here for you, don’t lose hope just yet. Things can get tough and they might stay that way for a while; bleak times might take their toll on you but remember