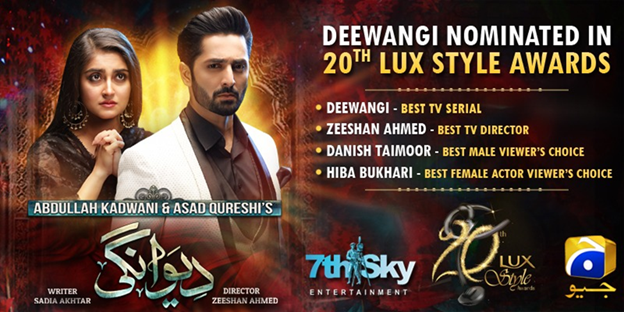 The Lux Style Awards, Pakistan’s most prestigious award show that celebrates the best in entertainment and fashion, is right around the corner. This year’s edition promises to be bigger and better than before, especially after the list of nominations was announced. The esteemed production house, 7th Sky Entertainment, led by the dynamic duo of Abdullah Kadwani and Asad Qureshi, has bagged 15 nominations in multiple TV categories, making it the first production house to receive so many nominations for different projects in just a span of one year. Among the shows that are nominated is last year’s blockbuster drama serial Deewangi.

Deewangi was a raging success and one of the most popular shows of the past decade. The show garnered rave reviews and a historic viewership of millions. And now, Deewangi has taken the Lux Style Awards 2021 by storm with impressive nominations. Apart from being nominated in the category for Best TV Serial, the lead actors Hiba Bukhari and Danish Taimoor have been nominated in the viewer’s choice for best actress and best actor category, respectively.

The story of Deewangi revolved around two people from completely different walks of life.In an ideal world, the two of them should have been together and have a happily ever after. Unfortunately, their story was set in the real world where the two faced quite a lot of problems, difficulties and tribulations. Their fate always put them on the opposite ends of a path that only led to destruction and despair. Fans loved Danish and Hiba’s onscreen chemistry and wanted Nageen and Shahjahan, the characters they played in the show, to end up together.

According to statistics, Deewangi managed to score average 11.8 TRPs in viewer’s rating, higher than a multitude of other shows. Two of the show’s episodes and the teaser trended on no.1 on video sharing site YouTube. With its last episode, Deewangi stands at a total of 404.9 million views on YouTube and counting. That is a staggering number and goes to show the success Deewangi enjoyed during its run.

Danish and Hiba’s brilliant performances won the hearts and approval of critics and audiences alike and even managed to earn them nominations at the LSAs. Fans are excited and elated beyond compare. They want their favorite onscreen pairing and Deewangi to sweep awards in all the categories and are voting in large numbers to make that happen.

If that happens, it will be rightly deserved because a show as amazing and well-executed as Deewangi deserves all the love, appreciation and awards it can get. May the odds be in their favor!