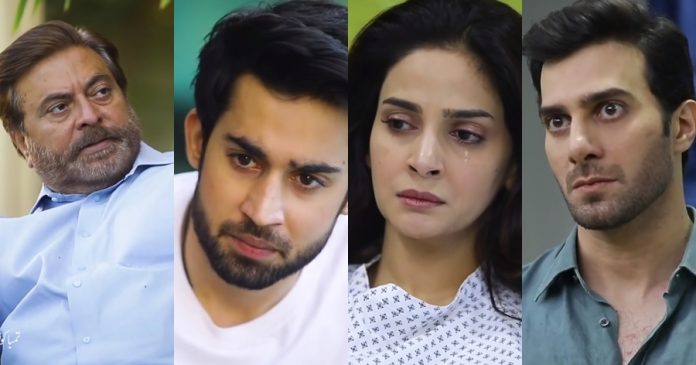 Cheekh has been airing on ARY Digital for quite a few weeks now, and reviews of it has made rounds all over social media. This drama by Big Bang Entertainment is being appreciated by the masses for its clear depiction of a heinous crime mixed with messed up family values. The drama focuses on a brave woman Mannat, on a journey to seek justice for her friend who has brutally been murdered by her own brother in law. In the middle of opposing forces, Mannat continues to fight while she goes through one tragedy after another.

In the latest episode, Shayan reveals the news of Mannat’s miscarriage to Yawar, and tells him the name of his baby’s murderer. We were hoping to see some extremely shocked expressions on Yawar’s face, but NO, he couldn’t utter a word. However, it was quite satisfying when we watched him go threat Wajih later on. For a moment it looked like Wajih was shocked to know about the miscarriage, as if he felt a tiny pinch of remorse in his stone-cold heart. However, the very next moment clarified his worry; it was Yawar’s warning, not the crime that had jilted him.

Mannat is again shown in the hospital, away from the court hearings. Looking at the mess that Mannat’s lawyer is making in the court, it seems plausible that he might lead them to disaster. On the other side, Wajih’s lawyer is far more trained and keeps the case in his hand. The sequence of the court session has begun to be a little tiresome now, with the kind of silly antics Mannat’s lawyer is bringing forth.

Ramzan finally sees his life turn over. Shariq, who found him at a Mazaar, finally calls up Haya to let her know about Ramzan. Haya takes quick decisions to rent a house for Ramzan and his family, while Shariq arranges a job for him – and what do you know, his life changes entirely for the good. But what hasn’t  changed are his inaudible dialogues and persistent crying. Even during the court sessions, he shivers before Aqilzada when he is questioned, and everyone knows confusing Ramzan has always been a piece of cake sadly.

A predictable court scene is finally displayed when Amir Khan changes Nayab’s statement. It is quite clear that Wajih and his lawyer are doing a lot of homework, preparing their witnesses and changing the main evidence. Unlike Mannat who sits back and lets the lawyer fight the case with random arguments. Mannat’s lawyer talks about a forensic exam, but it is pretty obvious that the reports would have been changed. It’s no surprise – Wajih’s elder brother is an expert in changing reports, isn’t he?

Overall the episode was good, however, the story is losing its impact. Mannat should have kept her focus on the case, showing her courage against Wajih’s cruelties. She needs to come out strong, and we can anticipate that before the last episode is aired, things will take a turn. It might be a part of this tragic story, for Mannat to face one misery after another, but we really do hope she manages to avenge Nayab’s murder. Do post your views about this episode of Cheekh and let us know what you think about it. By Asbah Umais 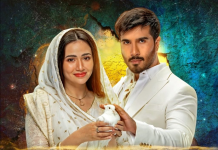 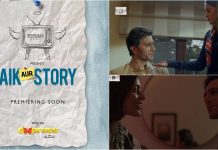 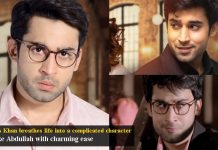 The O’rangreza men are back with some sizzling pictures!